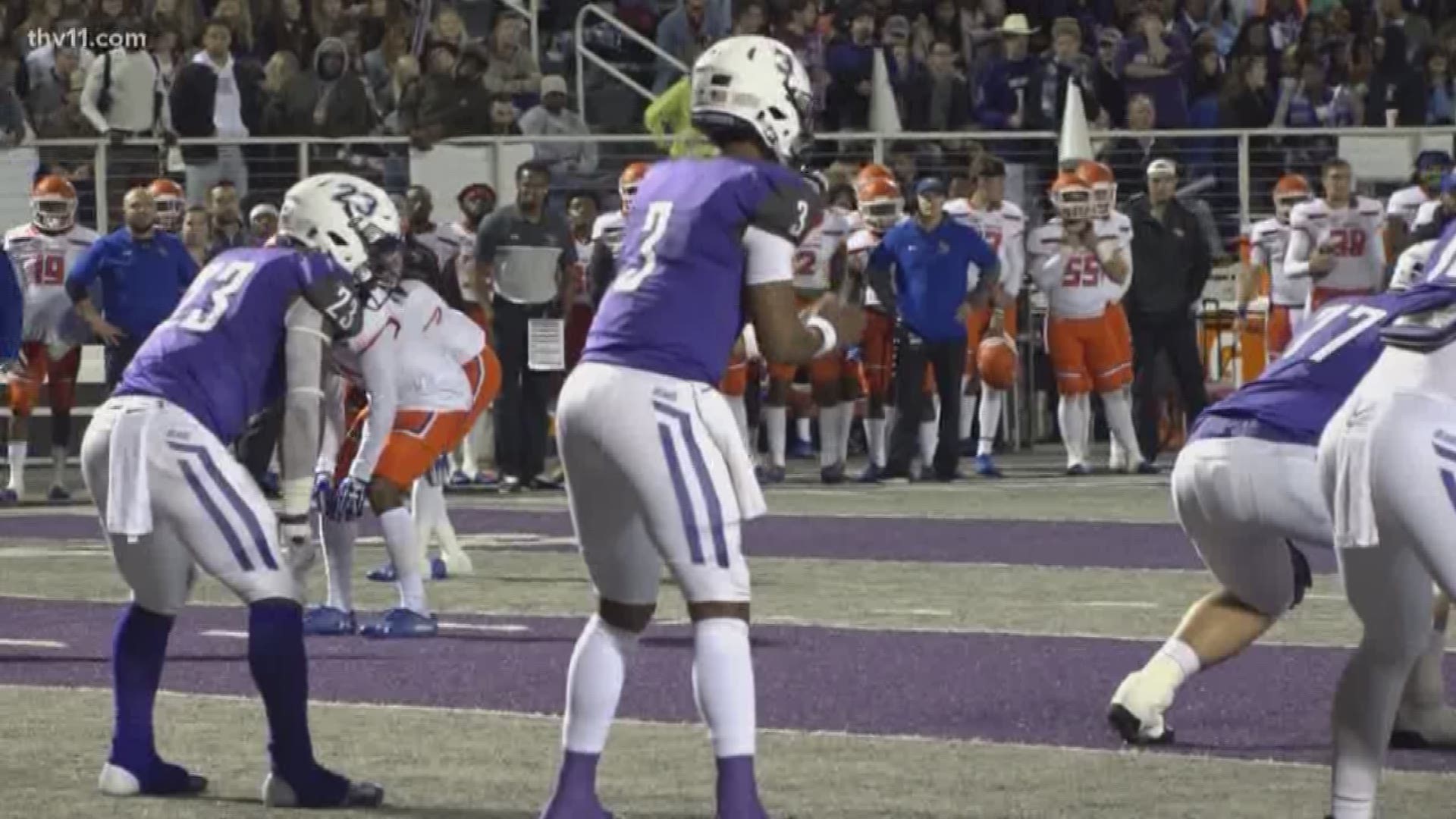 CONWAY, Ark. — The University of Central Arkansas Bears did it again Saturday night, and this time it was good for sole possession of first place in the Southland Conference.

The No. 10/12 Bears came from behind to win for the sixth time this season, overcoming a 22-7 third-quarter deficit to down the No. 21/25 Sam Houston State Bearkats 29-25 in a Top 25 Homecoming showdown on "The Stripes" at First Security Field at Estes Stadium.

The Bears' only lead of the game came on a 15-yard touchdown pass from sophomore quarterback Breylin Smith to freshman receiver Tyler Hudson with 3:57 remaining in the game. UCA then turned to its defense to wrap up the victory. After the Bearkats (5-4, 4-2) drove to the UCA 15, UCA junior tackle Azuka Mgbemena recorded his first career sack, forcing SHSU quarterback Ty Brock into a fumble that went right into the hands of UCA sophomore linebacker Malik Wilson to secure the win.

The win for UCA (6-2 overall), coupled with losses by Nicholls State and Incarnate Word, puts the Bears in first place by themselves with four regular-season games remaining. UCA, which lost to SHSU in overtime last in Huntsville, Texas, evened the series at 7-7 with the victory.

UCA (6-2, 4-1) lost its No. 1 receiver Lujuan Winningham with an arm injury in the first half, along with tight end Josh Nix and offensive lineman Will Burgess. Still, the Bears showed the fight they have all season, outscoring the Bearkats 29-9 in the second half. UCA scored on four of its six second-half possessions. Smith completed 24 of 43 passes for a career-high 405 yards and four touchdowns, tying his career best. Smith, who broke his ankle and was lost for the season a year ago in the fourth game of the year against SHSU, threw for 253 yards and all four touchdowns on just 10 completions in the second half.

The Bearkats, also battling numerous injuries, jumped out to a 16-0 halftime lead while its nationally ranked defense held the Bears to minus 1 rushing yards and 152 total yards of offense in the first 30 minutes.

The second half started much better for the Bears, with Smith connecting with junior wide receiver Joe Hampton for a 40-yard touchdown pass on the fifth play of the half to cut the deficit to 16-7. After the teams traded punts, SHSU stretched its lead to 22-7 with a 7-play, 55-yard scoring drive at the 6-minute mark of the third quarter. But Smith found Hampton again less than two minutes later, this time from 53 yards, making it 22-14.

Midway through the fourth quarter, senior running back Carlos Blackman was on the receiving end of a short pass from Smith that he carried 28 yards down the right sideline for a touchdown. A two-point conversion pass from Smith to Blackmon that tied it at 22-22. Sam Houston drove to the UCA 25 but the Bears held and forced a 42-yard field goal by Hunter Pinegar with 5:13 remaining.

UCA got the ball back at its own 33 after a 31-yard kickoff return by redshirt freshman Cameron Myers. A pass interference on first down moved the Bears to midfield and a 31-yard pass to Hudson on third down went to the SHSU 15. Smith then found Hudson for the 15-yard touchdown, the fifth touchdown reception for the freshman this season with 3:57 left. A personal foul on SHSU allowed the Bears to kick off from the 50 and the Bearkats took over on their 25 after the touchback.

After the Bearkats moved out to midfield, consecutive pass breakups by Juan Jackson and Robert Rochell and an incompletion forced a fourth and 10 at the UCA 48. Brock threw complete to Nathan Stewart down the sideline to the UCA 28 for the first down. But on the 14th play of the drive, facing second and 10 at the 15, Brock was sacked for a loss of three and coughed up the ball for SHSU's only turnover of the game.

UCA finished with 450 yards of total offense, with 299 of those coming in the final two quarters. The Bears ended up averaging 6.4 yards per play despite rushing for just 45 net yards.

The Bears return to the road next Saturday, taking on the Lamar Cardinals (4-4, 2-3) in Beaumont, Texas. The Cardinals had an open date this week.