Whatever That Was Against Rice, It Can’t Happen for Hogs Versus Longhorns 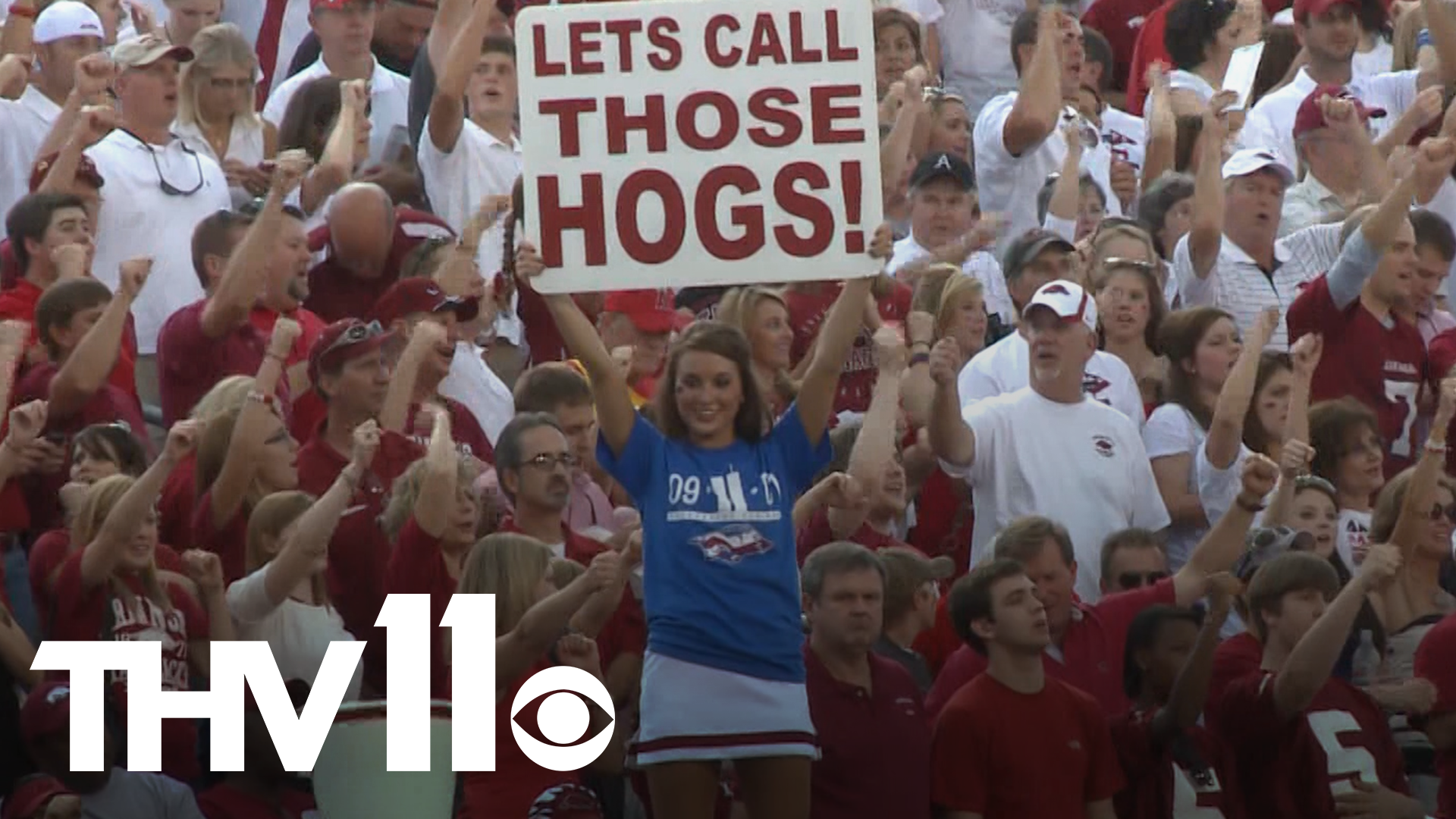 LITTLE ROCK, Ark. — Arkansas head football coach Sam Pittman spoiled Razorback fans last year. Yes, we realize the thought of going 3-7 in his first season would hardly spoil any college football fan base, but consider what came before him. Also consider that surprisingly, against easily the toughest schedule Arkansas has ever faced, the Razorbacks competed all out for 60 minutes every week, at least until the last half against eventual national champion Alabama.

Pittman’s first edition of Hogs, and his first year ever has a Division 1 head coach, produced a team that was maybe the most appreciated 3-7 squad in college football history. The record may have suffered because of that schedule, but they looked well-coached. The fan base, based on social media comments and their reactions at games, came away impressed and ready to pull themselves up out of the abyss created by the previous two Hog coaching staffs. Pittman had been part of one of those, and when he left Bret Bielema for Kirby Smart’s Georgia staff to coach their offensive line starting in 2016, tough, physical Razorback football as we knew it seemed to go with him.

Of course, when even the national football experts expect you to go 0-10, and extend what was already a 19-game Southeastern Conference losing streak before the first kickoff last year, anything better than that will get some positive notice.

Chad Morris and his suspect staff did that to the Razorback fan base over 2018-2019. A roster that included several players now working on Sundays in the NFL wasn’t good enough to win any SEC games, and barely any of the nonconference games, over those two years. Morris couldn’t clear the deck fast enough of Bielema holdovers, and those players, not to mention the fans having to watch it, couldn’t rid themselves of Morris fast enough either.

Pittman, really the only name to matter to Arkansas fans that wanted the job after Morris’ dismissal, easily was granted at least one grace year. Then he went and ruined it by winning 3 games and almost winning 5, if not for those darned SEC refs. Heck, another little break or two here and 7-3 wasn’t totally out of the question. Only Bama, Texas A&M and Florida were obviously head-and-shoulders better. But you are what the record says you are, and Arkansas finished 3-7, then earned a bowl invitation (yes, remember, the Razorbacks landed in the Texas Bowl opposite TCU, until the struggling and depleted Frogs decided better of it and canceled). You bet, 2020 was one weird year.

A 3-7 record that would put most coach on the hot seat got this coach lauded, and Arkansas fans this summer had those preseason high hopes again for a better record than what the talent on hand probably can produce.

So, sure enough, when Arkansas looked like it wasn’t even coached, at least on offense and in special teams, in last week’s opener against Rice, the Hog faithful were ready to leap off the tottering bandwagon by halftime. It was as if they’d long forgotten how awful Morris’ 2019 opener was, a 20-13 win over FCS Portland State. Even though most of the fan base held Rice of Conference USA (you know, the league that also includes Tulane, which was giving Oklahoma a scare earlier last Saturday before losing 40-35) to low esteem, the Owls at least went 2-3 last year in a COVID-shortened season and whipped then-15th-ranked Marshall on the road 20-0 in the finale. They also had around 19 starters back.

But Pittman also returned almost his whole team, with the exception of quarterback Felipe Franks and wide receiver Michael Smith, from last year’s 3-win juggernaut. When Franks’ replacement, K.J. Jefferson, who had filled in better than admirably against Missouri last year, ran for Saturday’s first score, a 34-yard run, surely everyone thought this squad was indeed headed for bigger and better things.

But reality, or something, kicked in. After Jefferson’s score, and as Pittman admitted later and took full blame for, the Razorback staff looked like they’d just rolled the team out for its first August scrimmage. Only Barry Odom’s defense could serve as the saving grace during the first 30 minutes. The defense spent the first half backed up in its own end, somehow keeping Rice and its pedestrian offense at bay. They held once and Rice missed a field goal. The Hogs then had a blocked punt, but still the defense held and allowed just 3 points. They were about to turn the ball back over to the offense having allowed yet another field goal, only to see the back judge throw a mystery flag for interference on junior corner Ladarious Bishop in coverage that most would deem perfect for Alabama’s Crimson Tide (heck, just one quarter later, a Rice D-back held onto Tyson Morris’ left arm on a Jefferson deep sideline throw, requiring Morris to make a sensational one-handed catch, with no flag thrown).

Rumors after the game had Pittman, in the halftime dressing room, turning over a table and screaming all kinds of epithets at his mostly asleep team for its ineptness. A believable source for me to the halftime inner workings only volunteered that “it wasn’t pretty.” Pittman had plenty to yell about: receivers, including All-America hopeful Treylon Burks, having no concentration and dropping short throws; or, in senior De’Vion Warren’s case, stepping out-of-bounds before catching a pass; or that gosh-awful blocked punt; or another punt that was supposed to be directionally kicked toward the sideline where the coverage was headed, but instead was run back into UA territory; or a targeting call and late-hit flagged on senior captain Grant Morgan (only to be outdone later by yet another stupid targeting call earned by head-lowering fellow senior linebacker Bumper Pool, which will keep him out of the first half against Texas), and all the other penalties, plus a bobbled kickoff, the missed blocking assignments by experienced O-linemen, and so on.

After watching a first Pittman squad over the 10 toughest games ever in one season compete hard week after week, here we were looking like we were back in the Morris era, if not the end of the Bielema era where the likes of Louisiana Tech were one play from upsetting Arkansas at home.

Somehow, giving up an embarrassing deep throw for Rice’s second touchdown (after he was, correct call or not, responsible for the first) angered Bishop enough that he burst 40 yards for a kickoff return that energized the team and crowd. Jefferson hit Morris with that aforementioned pass and amazing catch, and the drive kept marching to the Rice 4, from where and Jefferson capped it by keeping and diving in to start a 31-0 run that finished the Owls 38-17.

I said to a still-despondent friend and Hog fan afterward about the performance: If you had arrived in the third quarter with Arkansas down 17-7, not knowing how any of it had gone to that point, and watched the remainder of the game with the Hogs dominating as you expected, would you feel the same way?

“We’re really excited to play Texas, a lot of history there, our kids will be educated on the history” Coach Pittman says #WPS #razorbacks

Can we erase the first 35 minutes of the game? Of course not. Certainly you know friends, fans and even radio commentators who think that way, though. We also have to accept that the offense may have had two nice scoring drives, but mostly it sputtered, though the Hogs did rush for 245 yards, and Jefferson was 12 of 21 passing with several throws dropped. Two Jalen Catalon interceptions and runbacks set up short TD drives, and the offense failed to capitalize on the most impressive pick of the day, Montaric Brown’s perfectly played sideline theft at midfield in the third quarter. Jefferson broke yet another keeper in the fourth quarter, too, and it should have been a 70-yard TD run that instead was half that thanks to a holding call on a freshman receiver blocking downfield. At least Jefferson and the offense pushed that one over, too, in the pull-away during the fourth quarter.

Should we be concerned that after promises of a much-improved special teams unit this season with a half-million-dollar-salaried, dedicated special teams coach, the special teams still looked as awful as the entirety of last year? Well, hold that thought: Arkansas’s kickoff coverages had it easy because the Hogs now kick off regularly into the end zone; and the freshman placekicker, Cam Little, who had a few observers a bit worried in the spring with what seemed like an overhyped leg, actually looked completely different and boomed all his placements successfully.

But why would a member of a punt coverage team not execute a simple job, one they teach junior high kids, and not start his downfield sprint until he’d delayed his defender one count – that’s why the punt got blocked. Sam Pittman could only say later, “I’d like to be one of those teams that can go a whole game without getting a punt blocked.” Well, it’s his friend and neighbor that he brought aboard the staff, Scott Fountain, who is in charge of that for another year after last year’s disasters (blocks against Georgia and Auburn were crushing). COVID protocols and not knowing which players are available from week to week is no longer an excuse.

Will it be cleared up by Saturday night versus Texas? Or will Arkansas’s offense and special teams put the defense in another field-position hole for an entire half? Do you think new Longhorns head coach Steve Sarkisian, fresh from directing national champion Alabama’s impossible-to-stop offense, can call a more masterful game than Rice’s coaches with the ball on the Arkansas side of the 50 close to three quarters, especially with dynamic Bijan Robinson and dependable receiver Jordan Whittington on his team?

After what some of the Razorbacks went through to get here, the ignominy of losing every SEC game for more than two years, it makes no sense – not even the fact that Texas loomed a week away – for that type of performance from two-thirds of the team in the first half last week. It makes no sense why Pittman hasn’t made special teams the program’s biggest priority, like the great Frank Beamer did for years at Virginia Tech, even ahead of Odom’s defense, and certainly ahead of coordinator Kendall Briles’ hit-or-miss play-calling.

Special teams at Arkansas historically have been a difference-maker, and they should again be a facet where Arkansas can turn a game every Saturday. When you lack the kind of immense talent that at least five or more of  your opponents possess, you can still get an edge with exceptional coaching, AND PRIDE, in the special teams. Yet, some of the players Arkansas sends out on its special teams seem to take it as a chore for their rare opportunity get on the field. Or maybe, shall we say it, they’re just not good enough and that’s all the Hogs have to work it. Still, the coaching could be better.

This applies across the board to offense and special teams and for the head coach having his squad completely focused for a season opener, rather than needing to wake them up with a needed halftime berating. Good teams don’t require that.

If Pittman has to rally the troops to play this Saturday night against Texas, though, then there really are problems. And all that goodwill earned in last year’s season will have gone to waste. A 3-7 record last year was somehow heralded. A 3-9 or 4-8 team this year won’t be.

Jim Harris has covered Arkansas Razorback football since 1976 for a variety of state media organizations, including the Arkansas Gazette and ArkansasSports360.com. He provides commentary each week as part of the team on THV’s “HogZone” Saturdays at 10:30 p.m.