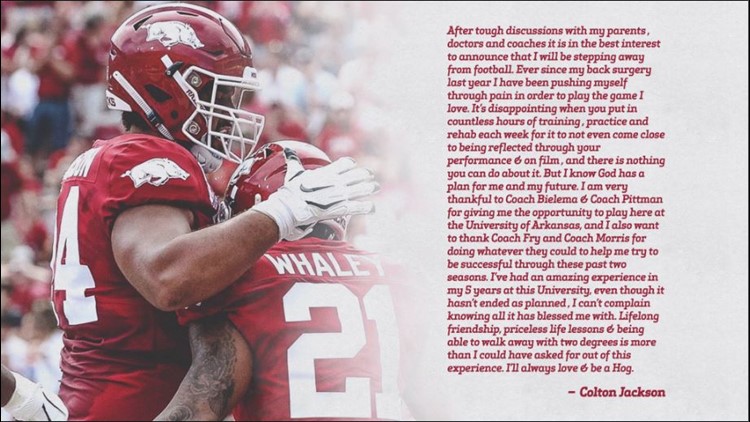 Colton Jackson stepping away from football

FAYETTEVILLE, Arkansas — Colton Jackson is stepping away from football.

Chad Morris announced the move in his press conference Monday.

“I met with Colton Jackson just a little bit earlier, and Colton has really struggled with getting healthy and staying healthy,” Morris said. “It just seems like it’s something that continues to re-occur. He and his family have made the decision that he’s going to step away from football. He’s very upset and frustrating that he can’t get healthy and stay healthy.

Jackson confirmed the decision later in the afternoon on his Twitter page, saying that he'd had an "amazing experience" at Arkansas and that he'll "always be a Hog".

Jackson missed three games this season due to injury.

He was a Class of 2015 signee out of Conway High School. Jackson redshirted his freshman year before playing three games in 2016. He started 10 games in each of his redshirt sophomore and junior seasons.