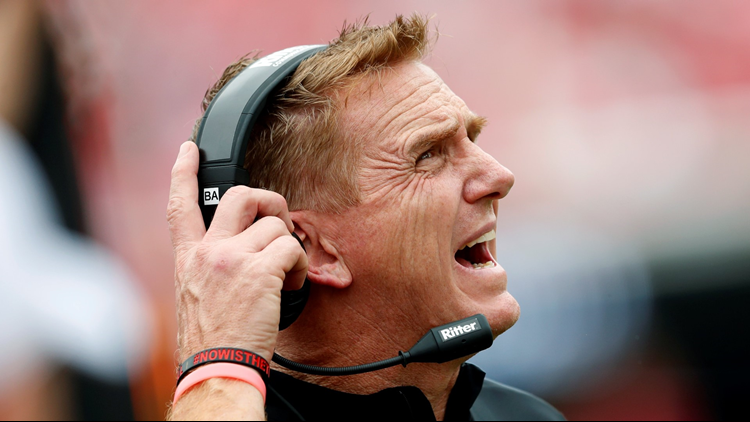 “The Fellowship of Christian Athletes is honored to recognize Coach Blake Anderson, not only for Arkansas State’s strong season and the Red Wolves’ win over Florida International in the Camellia Bowl last month, but also for the way he has made an indelible imprint for Christ on his players over the years,” said FCA President and CEO Shane Williamson. “We congratulate Coach Anderson and his players and staff for their accomplishments on the field, as well as for the way Blake has touched the lives of innumerable young athletes as he glorifies God through the game of football. Coach Teaff represents all that is good in coaching—a legacy of love for Jesus, his family, his coaches and players—and is a model to us all.”

Besides the breakfast today that honored Anderson as this year’s Grant Teaff award recipient, FCA hosted other events at the football coaches’ convention in Nashville, including an FCA worship service Sunday morning and a Coaches Huddle Sunday evening. A gathering for Fellowship of Christian Athletes Character Coaches was also planned for Monday afternoon.

Upon his arrival at A-State, Anderson assembled a well-respected coaching staff and began working to put together his first recruiting class in an abbreviated time period. Not only did he sign the Sun Belt’s No. 1 ranked class by Rivals.com, his recruiting classes have ranked among the top three teams in the league by at least two of the major recruiting services.

Before joining Arkansas State, Anderson worked on head coach Larry Fedora’s staff as offensive coordinator and quarterbacks coach at both North Carolina and Southern Miss. His dynamic offense helped lead the two programs to 34 victories, three bowl game appearances and two conference or divisional titles. Along the way, his potent offense was responsible for breaking both schools’ total offense records while also ranking among the most productive teams in the nation.

A two-year letter-winner at wide receiver for Sam Houston State from 1989-91, Anderson was named Southland Conference All-Academic as a senior. He also played for two years as a quarterback and receiver at Baylor (1987-89) before transferring to Sam Houston. Anderson graduated with his bachelor’s degree in kinesiology and also attained his master’s degree in sports administration from Eastern New Mexico in 1994. Anderson and his wife, Wendy, have one daughter, Callie, and two sons, Coleton and Cason.

Named after Grant Teaff, former Baylor University coach, AFCA executive director and Trustee Emeritus of the FCA Board of Trustees, the Coach of the Year Award presented by FCA recognizes a football coach who exemplifies Christian principles and who is involved in FCA. The award is also based on the success and performance of the coach’s team that season. Previous winners include Matt Campbell (2018), Scott Frost (2017), John Stiegelmeier (2016), Larry Fedora (2015), Dabo Swinney (2014), Tommy Bowden, Tommy Tuberville and Jerry Kill.