Arkansas’s trench corps must rebound after embarrassment at Georgia 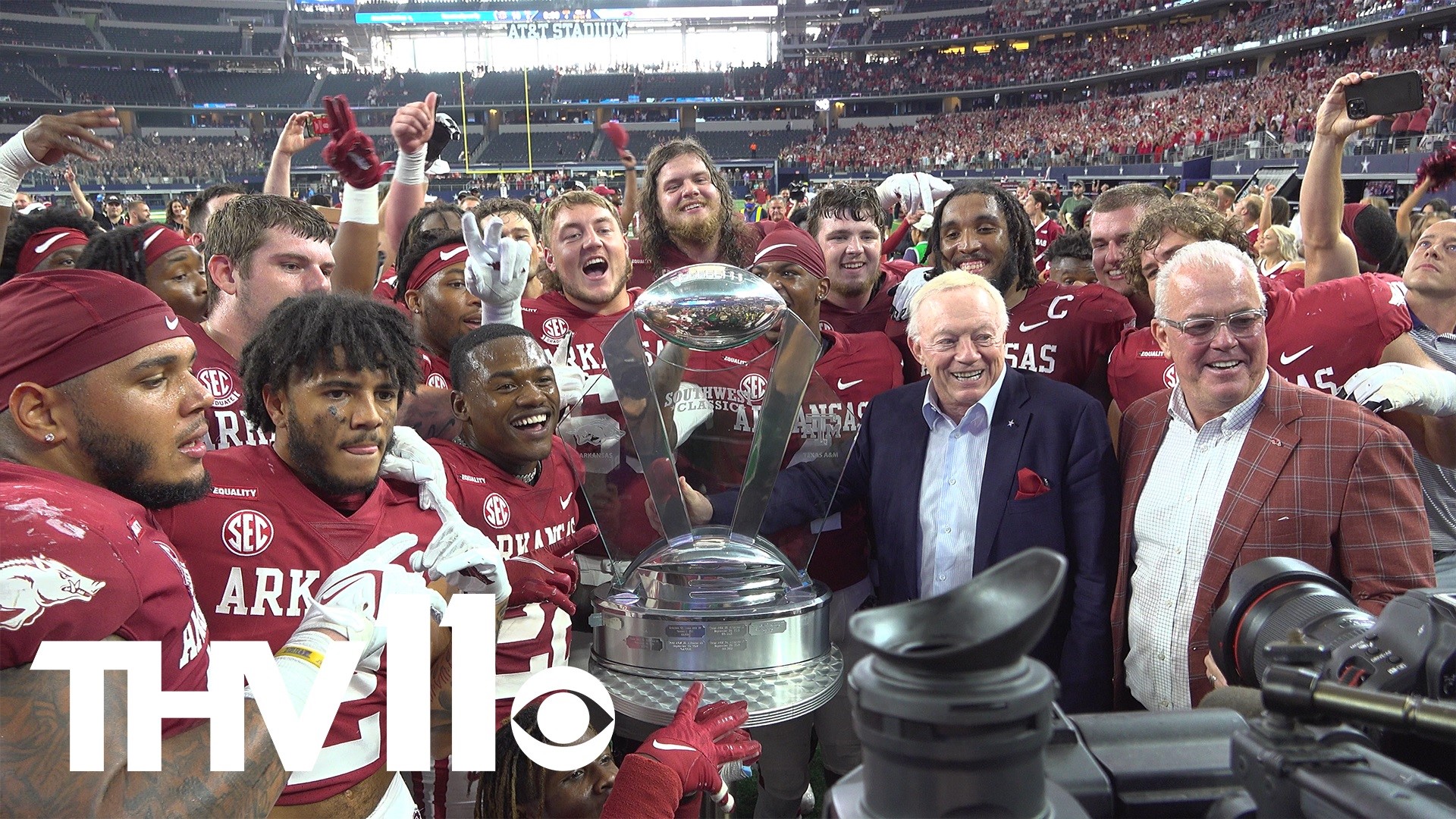 LITTLE ROCK, Arkansas — Georgia did not play talented passer J.T. Daniels at quarterback last week against Arkansas, reportedly because of an injured back muscle, but that didn’t matter. Instead, as Arkansas fans would surely like to forget at this point, Georgia veteran backup Stetson Bennett did almost exactly what he managed a year ago in the season opener in Fayetteville, coming off the bench to direct the No. 2-ranked Dawgs to an easy 37-0 victory over the previously No. 8-ranked Razorbacks. This time, with Arkansas’s defense barely putting up a fight against the run, he rarely had to throw.

Arkansas had not faced a quarterback who could beat them in the Hogs’ previous four games. Last week the quarterback didn’t beat the Hogs as much as Georgia’s offensive and defensive lines overwhelmed their Hog counterparts. The Razorbacks’ three-man defensive line got blown off the ball from the first snap, when Bennett kept around the right side for 10 yards. While the Hogs had displayed their best pass rush in probably five years up to last week, there were few pass attempts by Georgia to rush – the run game was that dominant, to the tune of 273 yards on the ground.

Meanwhile, Razorbacks’ offensive line had been spotty at times through the first four games, especially at the guard positions, but last Saturday against a future NFL front line it was downright inept at pass protection, at blocking for the run and in committing procedure penalties at the worst possible time. Arkansas often started behind the 10-yard sticks simply because the O-line couldn’t keep from jumping before the snap. Even though they had significant playing experience across the board, they played like newcomers to the college game – nervous if not frightened from the word go. Georgia had a 21-0 lead in the first quarter before anyone saw any semblance of the Razorbacks settling down. And even that was short-lived.

Second-year Arkansas head coach Sam Pittman, who two years ago was coaching Georgia’s O-line, seemed shocked, floored and generally disheartened after the game, and that’s to be expected after such an embarrassment. Arkansas played hard, and kept fighting for 60 minutes as they’ve done mostly every outing with Pittman, but it seemed it was with the effort of a team that had figured it was beaten when it walked onto the field. Maybe seeing their massive, talented opponent on the other side of the field in warmups sent shockwaves through the Hogs. It was reminiscent of several Razorback games of the past two decades, most recently when Pittman’s first squad laid down at home against No. 1 Alabama to end the season in a 52-3 loss. At least the Hogs managed to make their field goal in their one scoring chance that day.

But it also reminded this writer of the night Arkansas played Georgia in the SEC Championship Game in 2002 in Atlanta, where 95% of the crowd was pro-Dawgs. Arkansas was a decent-to-good team that year that won nine times, five times in the SEC – Alabama, which was ineligible for the SEC West title, ran roughshod over Matt Jones and the Hogs, scoring on its very first snap; Kentucky caught Houston Nutt’s Hogs napping in Fayetteville; and Tennessee eked out a 6-overtime win after the Hogs, having miraculously rallied in the fourth quarter to tie the game at 17, had blown their chance in an earlier OT with a missed field. But those Hogs shocked Auburn at Auburn behind Fred Talley’s huge running day, and Jones engineered the Miracle on Markham over LSU at the finish to land the West Division spot in the league’s title game opposite Georgia.

But, like this past Saturday, a good team was still no match for a great squad, well prepared and loaded with NFL talent on both sides of the ball. Georgia, like this past Saturday, blocked a Razorback punt, this one for a safety that put the Dawgs up 16-0 early and it was essentially over before anyone sat down. Georgia won 30-3. Again, though, Arkansas made its field goal to avoid a shutout.

Things were so bad this past Saturday with everything going wrong that could, the previously perfect freshman Cam Little slightly pushed to the right his makeable try in the second quarter that would have at least avoided a shutout embarrassment. By the end, with redshirt freshman backup quarterback Malik Hornsby moving the Hogs with his feet and in the air inside the red zone in the final seconds, the Hogs didn’t even bother to stop the clock to avoid the ignominy of a shutout.  It’s OK; it wasn’t Georgia’s first of the season and probably won’t be the last.

It should be the last time the Hogs go scoreless this season, although Alabama does loom down the road in Tuscaloosa.

In the meantime, Arkansas has to bounce back fast and literally forget most of what happened in Athens while correcting a boatload of miscues. The Hogs are back on the road in Oxford, Miss., against the explosive Ole Miss Rebels, who gambled too frequently as the No. 12 ranked team – or was it not enough, as Ole Miss Coach Lane Kiffin proposed later – in falling behind 35-0 before making a more palatable final score of 42-21 in falling to the No. 1 Crimson Tide.

Which team will bounce back better from their road shellacking and exposure as a “pretender” to whatever level ‘Bama and Georgia are on?

This week for Arkansas, it really should come down to quarterback performance, or whether Arkansas’s defensive line can take advantage of a weaker offensive line than the Hogs saw last week. Against way lesser defenses than what Alabama has, Matt Corral has been nearly Johnny “Football” Manziel-like this fall, and he had a few positive moments against ‘Bama, at least until they closed in on the goal line while the game mattered.

Last year against Arkansas, Corral saw the Hogs “drop eight” defensive alignment and ostensibly freaked, throwing six interceptions and losing a fumble. Asked by an ESPN reporter in an interview in the run-up to last week’s game in Tuscaloosa, Corral wasted no time in saying “Arkansas” when asked which game last year had the most impact in preparing him for 2021. He must have forgotten the similar turnover-fest he had against LSU late in the year.

It would be startling if Arkansas defensive coordinator Barry Odom dialed up the identical rush-three/drop-eight defensive scheme this week, considering it was so effective in stopping Kiffin and the Rebels last year that they adopted it for themselves in 2021. But concerning, if not surprising, is this: Even though Arkansas players after last week’s disaster said they expected to see Bennett at some point, Odom didn’t have a better plan for the Dawgs’ mostly run attack. Maybe he only has these cards to play, moving them around a little, and nothing else. But, considering Pittman helped recruit and was aware of the skill level of those Georgia offensive linemen, it’s hard to believe Odom and Pittman thought their three-man defensive front, backed by two average starting linebackers and six defensive backs, would handle that onslaught, led by a run-first quarterback, in the same fashion that the Hogs dismantled a soft Texas team or Texas A&M with its O-line problems.

Maybe the guess was, it might not hold up versus Georgia but is Arkansas’s best chance against 10 of the 12 teams on the schedule.

Ole Miss may have two starters out in its O-line Saturday, and is very unlikely to have all-world depth behind the starters to fill the way Georgia could. We expect to see the Arkansas defensive front that was on display against A&M two weeks ago.

It comes down to how the defensive front can bother Corral. Allow him to set up and throw, and he’ll find receivers this year. Rest assured, Corral and Kiffin have had this game circled for a year.

The other way to slow Corral is to keep the ball out of his hands. It was obvious that, even though Alabama has another big-time passing attack with freshman quarterback Bryce Young and more world-class receivers, the Crimson Tide’s plan was to run, and run, and run, and eat up the clock. The teams barely had more than a possession each in the first quarter. Then Ole Miss started giving Alabama short drives on Kiffin’s gambles, his belief being it didn’t matter where the Rebels gave Alabama the ball, the Crimson Tide would score.

It’s doubtful Kiffin thinks of Arkansas in the same way. Yes, Arkansas and starting quarterback K.J. Jefferson can hit big plays in the passing game if the secondary focuses too much on Arkansas’s running game, or even worries too much about receiver Treylon Burks. And Arkansas should be able to run the football for 150-plus yards Saturday. But transfer portal additions and solid coaching from coordinator D.J. Durkin have improved Ole Miss’ defense substantially from this time a year ago.

Remember: Although forcing seven turnovers, Arkansas only pulled away late from the Rebels and the mistake-prone Corral by 12 points, 33-21, at home last year. It was a big win for Pittman’s first squad, a second over an SEC team, but Arkansas would not win a road game after that victory and just one more home game after that, over a Tennessee squad that was basement bound.

One other area with both teams that has to give tomorrow: These are two of the worst-penalized teams in all of college football. Arkansas is at 126th nationally; Ole Miss is at the bottom of FBS teams at 130. Arkansas had the embarrassment of being flagged for three different penalties on the same play last week (only one could be accepted) and minutes later incurred two flags on the same play. Georgia accepted 13 flags on the Hogs, some were offset with Bulldog penalties, and some were declined because other fouls superseded them. As bad as the game was for Arkansas in the trenches for 60 minutes, the penalties may have been worse, because that’s an area they controlled. Arkansas basically was forced to make up 100-plus yards in penalties on a day it could only manage 162 positive yards anyway.

The rushing game that helped Arkansas to a 4-0 start should be more evident Saturday, but the Hogs cannot add more yards to gain by drawing double-digit flags. Penalties and kicking game miscues have to be cleaned up at this, the halfway point in the season, or a promising start to 2021 may fizzle with a mediocre finish. A win Saturday will help Arkansas get back on the right path.

Jim Harris has covered Arkansas Razorback football since 1976 for a variety of state media organizations, including the Arkansas Gazette and ArkansasSports360.com. He provides commentary each week as part of the team on THV’s “HogZone” Saturdays at 10:30 p.m.