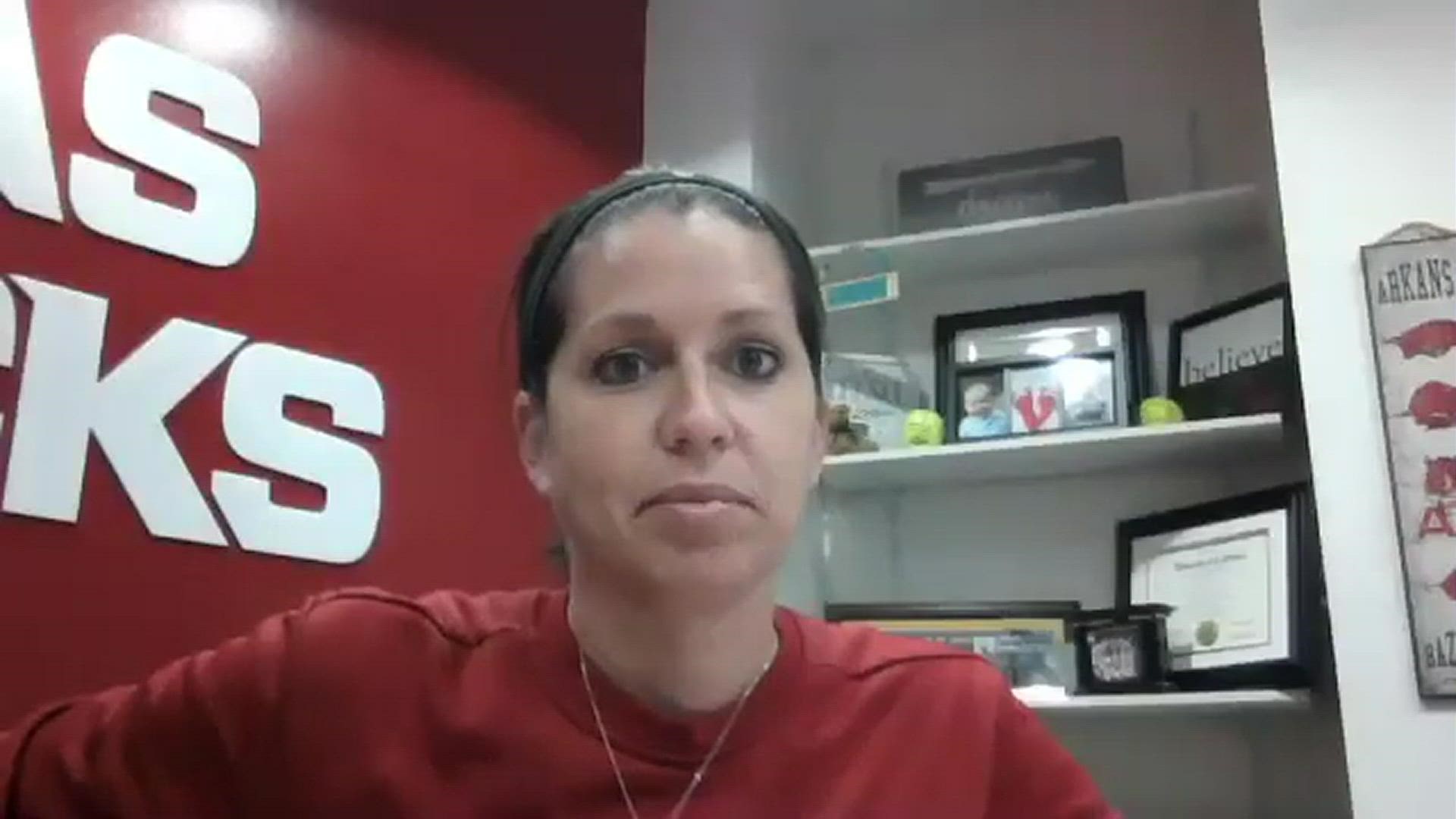 Mary Haff earned the program’s first ever SEC Pitcher of the Year award and head coach Courtney Deifel captured the school’s second SEC Coach of the Year honors, as announced by the league office on Tuesday morning. The Razorbacks also saw Haff and infielder Braxton Burnside named to the All-SEC First Team and infielder Danielle Gibson, outfielder Hannah McEwen and pitcher Autumn Storms tabbed to the All-SEC Second team. Additionally, Gibson earned SEC All-Defensive Team recognition and pitcher Jenna Bloom was named to the All-SEC Newcomer Team. The five total selections on the first and second team is the most in a single year in program history. Haff shared the pitcher of the year award with Alabama’s Montana Fouts.

🏆 𝐂𝐎𝐀𝐂𝐇 𝐎𝐅 𝐓𝐇𝐄 𝐘𝐄𝐀𝐑 🏆@CoachDeifel led the Razorbacks to the program's first SEC regular season title, and is the second coach in program history to win coach of the year ‼️ pic.twitter.com/8pZABh32XZ

Deifel guided the Hogs to a 40-8 overall record and a 19-5 SEC mark this season and captured the program’s first-ever SEC title. She is the first Razorback coach to earn coach of the year honors since Carie Dever-Boaz in 1999. Under the sixth-year Razorback skipper, Arkansas hit a program-best 89 home runs and went on school record 19-game win streak. The Razorbacks started conference play 12-0, the best mark by any league team since 2009. Since the SEC adopted a 24-game conference schedule in 2013, this year’s team is the first to go 11-1 on the road.

Haff ranked first in SEC-only games in wins (11), saves (4) and appearances (19) and fourth in strikeouts (79) and fourth in ERA (2.01) among pitchers who have thrown at least 80.0 innings. The Winter Haven, Fla. native was named a USA Softball Collegiate Player of the Year Top 10 Finalist and two-time SEC Pitcher of the Week. She totaled seven complete games and recorded a complete game shutout in the season’s final week at LSU. During conference-only play, Haff threw 87.0 innings and struck out 79, compared to 15 walks, and held opponents to a .197 batting average. On Feb. 26, she threw the second no-hitter of her career against Texas Tech, and was one error away from a perfect game. Overall, Haff places fifth in the country in wins (23) and saves (5) and 30th in strikeouts (175). The right-hander was named to the All-SEC First Team for the first time in her career after being named All-SEC Second Team in 2018.

Burnside smashed the Arkansas single-season program home run record and is tied for the fifth-most home runs in SEC history, blasting 24 bombs this season. Along with Haff, she was named a USA Softball Collegiate Player of the Year Top 10 Finalist and earned two SEC Player of the Week awards. The Paragould, Ark. product finished SEC play as the league’s leader in homers (10) and was second in slugging percentage (.825) and walks (23), third in total bases (52), fourth in on base percentage (.494) and sixth in RBI (19). In the three-game series at South Carolina, Burnside clubbed four home runs and drove in seven RBI. She also totaled two three-RBI games at Auburn. Nationally, the graduate student places second in home runs, 12th in slugging percentage (.889) and 13th in RBI (51).

Gibson placed second among league leaders in doubles (7), ninth in slugging (.616) and 10th (17) in RBI during SEC-only games. She led the team hitting .315 with 23 hits, while her .616 slugging percentage ranked second. Overall, her 51 RBI tied Burnside for the team lead and was 13th nationally. The Murrieta, Calif. native’s 16 doubles on the season is ninth-best in the country. Against South Carolina, Gibson posted her first career 5 for 5 game and walked once while hitting two doubles. She also hit a walk-off home run in the eighth inning to defeat Ole Miss. Defensively, the first baseman posted a perfect 1.000 fielding percentage and was a part of seven double plays.

McEwen continued her career trend of being an on base machine, recording a .462 on base percentage in league games and coaxed 17 walks, the sixth-most in the conference. The San Diego, Calif. native collected her 200th career hit this year, becoming one of just nine players in school history to reach the benchmark, and her .464 career on base percentage ranks second. Nationally, her 0.87 walks per game rank 12th. In 2019, McEwen was named First Team All-SEC.

Storms excelled in conference-only games, posting the league’s top ERA (1.24) while ranking third in saves (3) and fifth in opponent batting average (.207). She tossed two complete game shutouts against Auburn and Alabama and racked up ten strikeouts against the Crimson Tide. Overall, her 1.39 ERA is 35th in the country. In 2019, the Temecula, Calif. native was named Second Team All-SEC.

Bloom logged a 2.41 ERA, 4-1 record and 32.0 innings pitched in conference action. She made her longest start of the year against Ole Miss, throwing 6.2 innings in a no-decision effort. The All-Newcomer team is in its first season and recognizes student-athletes that had their freshman season cut short last season due to COVID-19.

The Razorbacks are the No. 2 seed in this year’s SEC Tournament and will play either Tennessee or Texas A&M in the quarterfinals at approximately 4 p.m. on Thursday, May 13.

Visit ArkansasRazorbacks.com for the latest information on all things Arkansas Softball. You can also find the Hogs on social media by liking us on Facebook (Arkansas Razorback Softball) and following us on Twitter (@RazorbackSB) and Instagram (@Razorback_SB).