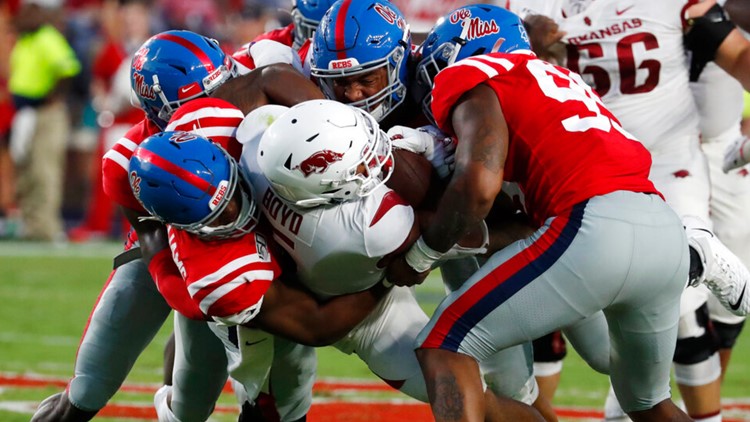 Photo by: AP
Mississippi defense tackles Arkansas running back Rakeem Boyd (5) is tackled behind the line of scrimmage during the first half of their NCAA college football game, Saturday, Sept. 7, 2019, in Oxford, Miss. (AP Photo/Rogelio V. Solis)

Not Tending to Detail May Be Hogs’ Offensive Coaches’ Failing

When Arkansas fans criticize the play-calling in last Saturday’s 31-17 loss at Ole Miss, they should also consider that at least four plays that night were well-designed and perfectly set up in the play script to result in touchdowns, if not for the Hogs’ poor execution.

So, maybe it would be fair for fans to shift their criticism from play-calling to whatever is happening on practice field, where one would hope the Hogs’ execution would have been ironed out before game time.

Still, those were all great designs that flopped due to execution. Any one of those plays going for a touchdown changes Arkansas’s attitude about winning this game in hostile surroundings, the confidence soars. Instead, the Hogs plodded through four quarters offensively – it seems like this has been the case since Chad Morris and Co. first arrived.

Bobby Petrino, appearing before the Little Rock Touchdown Club on Monday at a downtown hotel ballroom, recalled several stories from his four years as Razorback coach, and one illustrated his amazing attention to detail that provided his program with a winning edge (21-5 his last two years, 34-17 overall): The game-breaking fourth-down touchdown pass from Ryan Mallett to Joe Adams in 2010 vs. LSU, a 31-23 win in Little Rock that sent Arkansas onto the BCS Sugar Bowl against Ohio State, was the result of detail and practice that dated back to the previous spring.

Petrino noted Monday that he and his staff had picked up something in the previous year’s LSU matchup: In similar down-and-distance for a medium yardage fourth-down call, LSU would play its safeties “at the sticks” meaning even with the first-down marker. In this case, defending this day was the precocious youngster who a year later would become the acclaimed “Honey Badger,” Tyrann Mathieu. Joe Adams clicked his feet before finishing his double move on the safety; if the safety did something unexpected and dropped beyond the first-down line, Mallett would hit Adams there. If the safety maintained his spot at the sticks, Adams was by him in a flash. Mathieu froze, and Mallett hit Adams stride for a 39-yard scoring pass that pretty much finished that game.

Forget all the great designs, as we know Petrino had a file cabinet full of them. It was the attention to detail that amazed observers (and no doubt frustrated many players, who nevertheless played above beyond their perceived capabilities because of the coaching) during Petrino’s four years as UA head coach. And, in this case, running that same play for months on end, knowing maybe you might see the scenario again at the end of November, then it comes to pass and sends you to New Orleans? That’s a prescience that exceeds most football coaches’ abilities.

The media sees little if any of Chad Morris’ practices, whether in spring or in August or week to week during the season. Who knows what level of detail he and his staff apply to everyday activities and whether it’s in the ballpark of previous Hog coaches like Petrino and Lou Holtz? Morris, when he took the Arkansas job, brought an awfully young and collegiately inexperienced staff from SMU for the offensive side, while he turned the defense over to a mostly SEC veteran crew led by John Chavis. Fourteen games into his UA tenure, Morris still deserves trust from supporters that he’s been around big programs (Clemson) and knows good coaches, and that he made quality hires to assist him.

All we can tell from 14 games so far is, if you toss aside the current trope that the talent level left him was poor, it appears Morris and his staff’s attention to detail severely lacking on the offensively side and with special teams. You don’t dream up installing a surprise WildHog formation for Ole Miss, with weeks to prepare, and it look so feeble, or try to pull off an assortment of trick plays (including some mentioned above) and fail on all of them simply through lack of execution. It seems more like an attention to detail that falls way short – not just of a Bobby Petrino level, not just of an SEC coaching level, but of a college football level, period.

If this issue continues this week, Colorado State is good enough to beat the Razorbacks by two touchdowns.