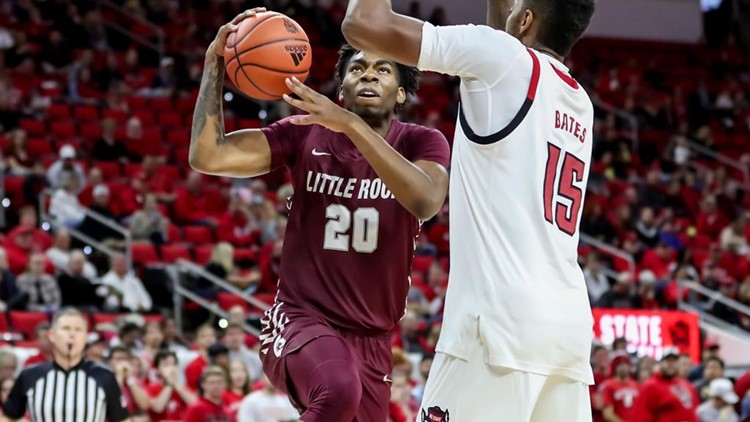 SAN MARCOS, Texas — Cold shooting for Little Rock and a stout defensive effort from Texas State helped the Bobcats build a 22 point first half lead, a deficit the Trojans could never recover from as the seven-game win streak is snapped in a 74-66 loss at Strahan Arena. Little Rock drops to 12-3 in Sun Belt play and 18-8 overall as its lead in the conference standings is whittled to two games.

Little Rock rallied in the second half, ultimately getting to within seven in the waning minutes, but the first half deficit proved too much to overcome.

• Little Rock was led by 14 points from Kamani Johnson on 3-of-5 shooting while knocking down 8-of-11 free throws. Johnson also pulled down five rebounds on the night for Little Rock.

• Ruot Monyyong added 12 points with six rebounds while also adding a pair of blocks. He ups his block total to 56 on the year, setting a new program single-season record during the Division I era.

• Ben Coupet Jr. finished with seven points while Markquis Nowell and Jaizec Lottie each contributed five points on the night. Lottie was 2-for-2 from the floor in 18 minutes of play.

• Little Rock was outrebounded 38-28 on the night, including 17-8 on the offensive glass. That difference led to a 17-9 edge in second chance points as Texas State dominated in the paint 42-28.

• Texas State's defense frustrated the Trojans in the early going as the Bobcats forced three Little Rock turnovers in the first five possessions while the Trojans were forced into tough shots. The Bobcats raced out to an early 9-0 lead, keeping Little Rock off the board for the first 4:27 before a pair of free throws from Monyyong broke the streak.

• The offensive struggles continued for the Trojans over the next six minutes as the Trojans made just one of their first 13 shots, watching as the Bobcats connected on nearly 60% of their shots early to break open a 31-7 lead.

• A 7-0 run by Little Rock was able to trim the deficit down to 15 at 31-16 with 5:04 to play. The Trojans had opportunities to cut that lead even further but continued to have struggles from the floor while the Bobcats continued to hold an edge on the boards.

• Little Rock exchanged baskets with Texas State and had a chance to trim down the deficit further, but a pair of missed free throws from Nowell ended his streak of 27-straight. That was amplified in the final second when he was whistled for a foul with 0.3 seconds remaining as the Bobcats took a 41-22 lead into the half.

• The Trojans shot 30.0% in the opening half and missed both three point attempts while going 10-of-16 from the free throw line. Texas State outrebounded Little Rock 26-13, including 13-5 on the offensive glass, building a 14-4 edge in second chance points.

• After getting it down to 13, Texas State was able to extend its lead back to 17 as the Bobcats and Trojans exchanged baskets for nearly eight minutes before a 6-2 run Trojan run got the deficit down to 12 at 62-50 at the 8:02 mark.

• Little Rock found its scoring touch, shooting 77% through the first 13 minutes of the second half as an 8-0 run got the Trojans to within eight at 62-54 with 6:41 remaining. Little Rock ultimately was able to get the deficit down to seven at 68-61 off a jumper from Lukic with 3:20 remaining.

• Down the stretch, key shots by Texas State thwarted the late Little Rock comeback as the Trojans' seven game winning streak came to a close. The loss came despite the Trojans shooting 66.7% in the second half.

• The road swing continues for Little Rock as the Trojans head north the DFW Metroplex for a Saturday afternoon meeting with UT Arlington. Opening tip against the Mavericks is set for 2 p.m. at the College Park Center.