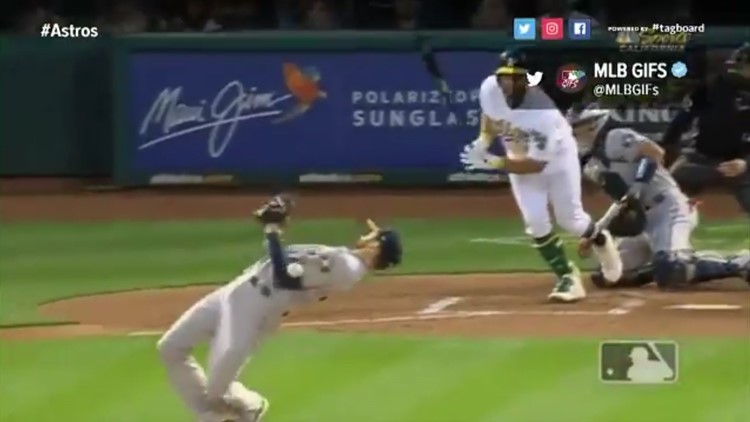 Photo by: KHOU
Collin McHugh has had a few close calls on the mound — nothing like this line drive he somehow dodged with an acrobatic maneuver that allowed the Astros to turn a nifty double play behind him.

OAKLAND, Calif. — Collin McHugh has had a few close calls on the mound — nothing like this line drive he somehow dodged with an acrobatic maneuver that allowed the Astros to turn a nifty double play behind him.

The ball hit by Kendrys Morales in the second inning of Houston's 9-1 win against the Athletics on Tuesday night skimmed in front of McHugh's face as his body bent backward and went parallel to the ground, reminiscent to the old Limbo dance. The ball touched the tip of the pitcher's ring finger, a much better option than his head or jaw — "probably the best place it could have hit me."

"I saw the ball come off the bat but I was in a weird fielding position so I kind of like whiffed on it with my glove and then by that time I was just already falling over so it was like, I just kept going and the ball just kept tracking," McHugh said. "It would have tested how strong my jaw is for sure. Thankfully we were able to get a double play out of it. Routine, just how you draw it up. ... I don't know if it gets much closer than that."

Alex Bregman hit a grand slam and Josh Reddick connected for a two-run homer against his former team in the Astros' majors-best 10th straight win.

Bregman's second career grand slam gave McHugh (3-1) all the run support he needed on the way to winning his third straight start. Bregman's other slam came May 14, 2017, at the Yankees.