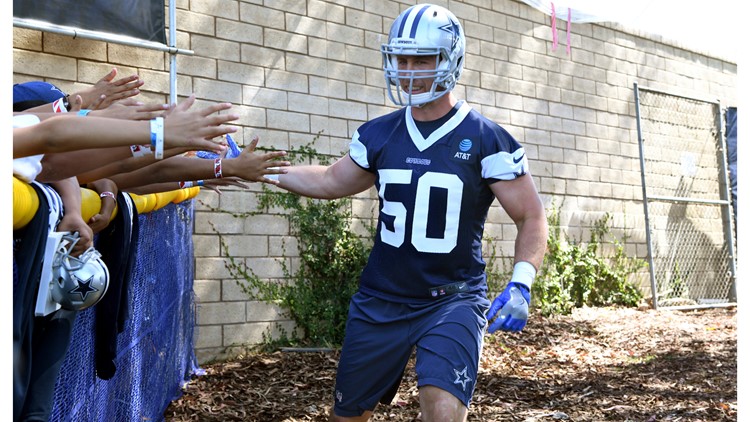 Pay cuts for aging players is part of the business of pro sports, especially in the NFL where everything must be juggled within a salary cap. When it was reported that the Dallas Cowboys and linebacker Sean Lee agreed to a pay cut in March the reasonable presumption is that the Cowboys wanted to save money with a then-32-year-old with a long track record for nagging injuries despite the fact that, when healthy, Lee has been a first team All-Pro as recently as 2016.

However, Cowboys chief operating officer Stephen Jones provided a detail during his weekly visit with "GBag Nation" on 105.3 "The Fan" [KRLD-FM] Friday that underscores how much the former 2010 second-round pick loves football and is the consummate teammate.

"Sean came to us and he wanted to play," Jones said. "We didn't even ask.”

"He said, 'Look, I want to adjust. I've missed a lot and I know you've got these two young guys that are going to need to be on the field. I think I can help.' And that's exactly what he's done."

Among Dallas linebackers, Jaylon Smith has seen the most snaps with 480 while Leighton Vander Esch is second with 380. However, Vander Esch missed Week 9's 37-18 win at the New York Giants, which opened up the door for Lee to start and have more playing time.

The former Pro Bowler, who has 244 snaps thus far, collected 12 combined tackles, a tackle for loss, and a pass breakup. Along with reserve Joe Thomas, the Cowboys have depth at linebacker that can absorb injuries while also providing playmaking ability.

The Cowboys will need Lee and the rest of the linebacking corps as they host the 6-3 Minnesota Vikings Sunday night at AT&T Stadium.

"You just can't have enough good linebackers in this game," said Jones. "There's going to be plenty of reps to go around. Joe Thomas figures right into that mix as well. He's been playing really, really good football for us. You're just fortunate to have four really starting caliber linebackers like that. It's a great asset for our defense."

While it is presumptuous to start thinking about the playoffs just a week into November, the philosophy behind keeping Lee in more of a reserve role and giving higher snap counts to Smith and Vander Esch is to keep Lee fresh for the latter parts of the schedule.

If Lee, who has missed 51 games in his career ⁠— over three full seasons' worth ⁠— is able to stay healthy for more consequential games, then the Cowboys like their chances with the linebacking corps.

Said Jones: "Sean's biggest issue has been staying healthy. I think we still want to continue to manage him and make sure that he's available throughout the season and hopefully into the playoffs and deep into the playoffs. So, it's just a great thing to have in terms of the depth we have there at the linebacker position."

Lee and the rest of the linebackers will have the challenge of stopping Vikings running back Dalvin Cook, who leads the NFL with 894 rushing yards and has a stellar 5.1 yards per carry rate.

"This Dalvin Cook is a handful," Jones said. "We're going to need everybody running to the ball, playing their gaps."

If the Cowboys have Lee healthy and leading the way, then it could be a recipe for victory Sunday night.

Do you think Sean Lee will one day find his name up on the Ring of Honor? Share your thoughts on Lee’s selflessness with Mark on Twitter @therealmarklane.