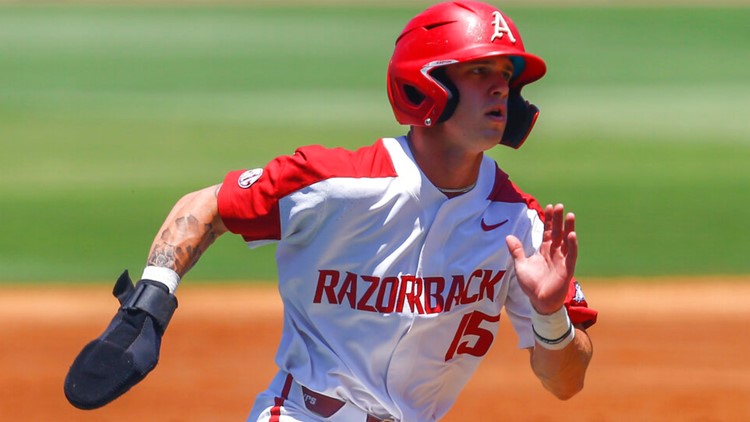 Photo by: AP
Arkansas' Casey Martin runs home to score on a RBI single from Arkansas' Dominic Fletcher during the inning of the Southeastern Conference tournament NCAA college baseball game, Wednesday, May 22, 2019, in Hoover, Ala. (AP Photo/Butch Dill)

FAYETTEVILLE, Ark. — The No. 7 Arkansas baseball team kicks off the 2020 season with a three-game series against Eastern Illinois on Feb. 14-16 at Baum-Walker Stadium.

Friday (Feb. 14) and Saturday’s (Feb. 15) games will both begin at 2 p.m., while Sunday’s (Feb. 16) finale is slated for a 1 p.m. first pitch. All three games will air live on SEC Network Plus via WatchESPN.com and the ESPN app. The games can also be heard on the Razorback Sports Network from Learfield/IMG, including locally in Fayetteville on 92.1 FM.

It is the second-straight year the Razorbacks and Panthers have opened the season against each other, making it the first time Arkansas has played the same opponent in back-to-back openers since the 2001-02 seasons. Last year, the Razorbacks swept Eastern Illinois, outscoring the Panthers by a total of 30-12. Arkansas is 29-2 all-time against Eastern Illinois, with all 31 games coming in Fayetteville.

The Razorbacks have won their last 18 opening weekend series dating back to 2002, including all 17 seasons under Dave Van Horn. Arkansas has never lost Opening Day under Van Horn, outscoring opponents 143-41.

Van Horn has tabbed RHP Connor Noland, LHP Patrick Wicklander and RHP Blake Adams to start on the mound this weekend against the Panthers. Noland made the most starts last season for the Razorbacks with 19, working 78.1 innings with a 4.02 ERA and 55 strikeouts. Wicklander rang up 90 batters, the second-most on the squad last year, putting together a 6-2 record and a 4.32 ERA in 15 starts. Adams is a freshman from Springdale, Arkansas, who played his prep ball at Har-Ber High School and had a high school ERA of 1.64.

Three Razorback juniors have been blessed with the honor of 2020 preseason All-America status from the various outlets that cover college baseball. Outfielder Heston Kjerstad and infielder Casey Martin have garnered praise from five outlets, twice both landing on the first team, with Kjerstad earning first team accolades from all five. The duo has also been joined by catcher Casey Opitz, who earned third team honors from Baseball America.

Arkansas begins the year ranked in the top 11 of all six polls, sitting as high as No. 4 from Perfect Game. It is the second time in three years the Razorbacks have found themselves inside the top five to start the year. Last season, Arkansas began the year in the mid-teens in most of the polls.

The 98th edition of Arkansas baseball features players from nine different states. Ten student-athletes on the 35-man roster hail from the Natural State, the second-most state representation on this year’s team behind 11 from Texas. Six position player starters and two rotation pieces return from last year’s College World Series team, as a total of 16 newcomers join the fray to make up the 2020 unit.

Baum-Walker Stadium played host to the largest postseason attendance in 2019, welcoming over 90,000 fans into its humble abode. Including the postseason, total attendance at Baum-Walker Stadium last season climbed to 348,775, the third-highest total in the nation. On average, Arkansas accumulated 8,719 fans per game, the fourth-highest in the country. It was the 16th-straight year that Arkansas has ranked in the top-five in the nation in attendance, accomplishing the feat in all but the first year of head coach Dave Van Horn’s tenure.

In an effort to keep Baum-Walker Stadium one of the premier venues in America, several enhancements have been implemented for the 2020 baseball season. The continuation of free, public Wi-Fi; beer and wine sales; metal detectors; Sounds of Baum and more make up some of the things to keep an eye on this season.