Opening Day 2020: Here's a look at the Nationals unusual home opener against the Yankees

This year's home opener will be one to remember, with World Series shoutouts and no fans in the stadium. And yes, there's still a President's Race. 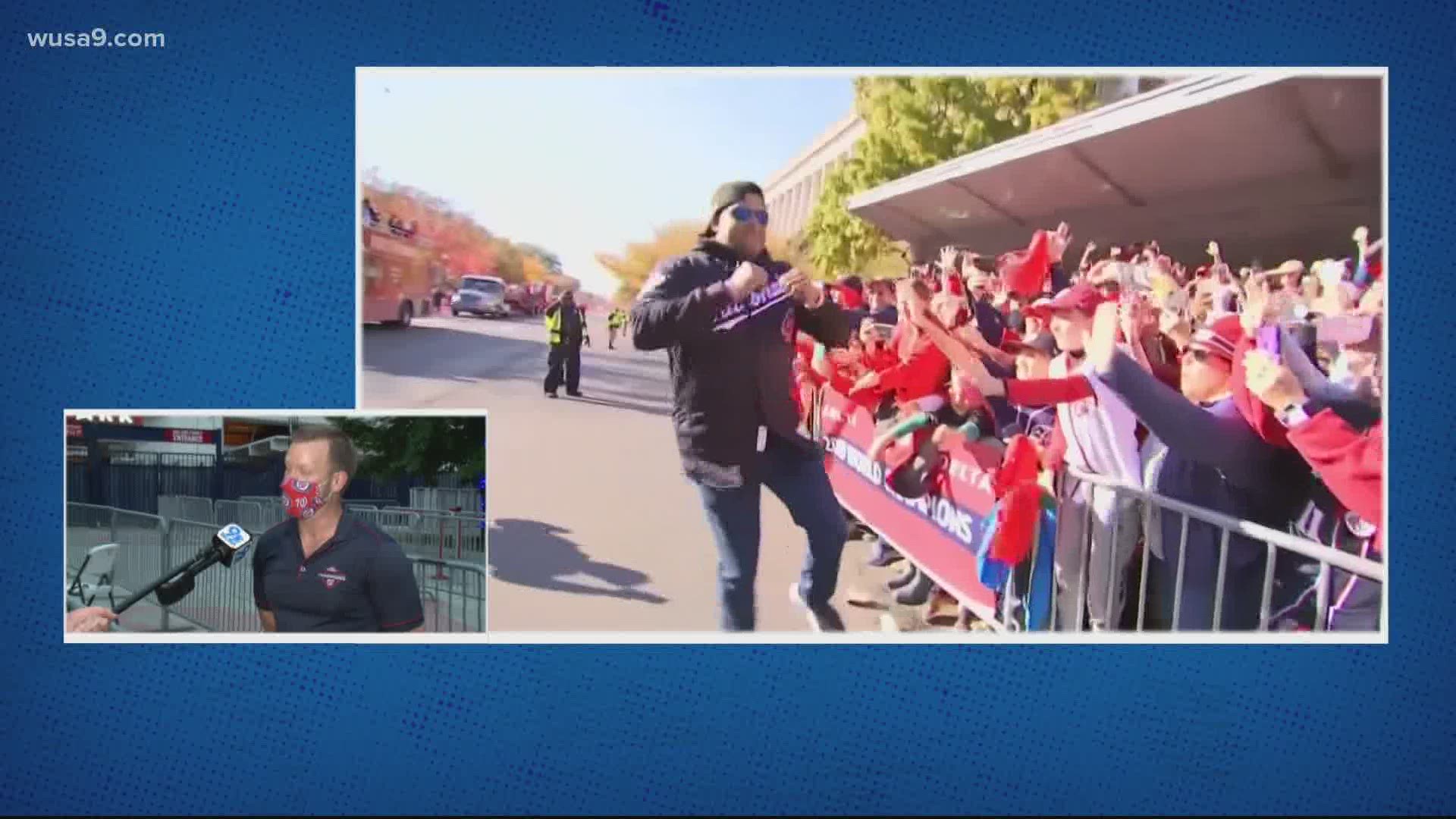 WASHINGTON — After months and months of waiting, baseball at Nats Park is back! The Nationals home opener against the New York Yankees is already one to remember this season as the team plays their first game back with no fans during a shortened season.

The season will kick off the way any Nats fans would want it to: With a giant unveiling of our 2019 World Series Champion flag being hoisted at center field Plaza. A World Series pennant will sit over the scoreboard, and there's already a giant championship sign hanging over the Budweiser Brew House in center field.

No, there is no such thing as too much World Series signage.

The team will also rock gold-trimmed jerseys and caps in honor of the championship, which will be available for purchase starting Thursday. The youth and adult replica jerseys start at $95 and $150 dollars and can be customized for an additional charge. 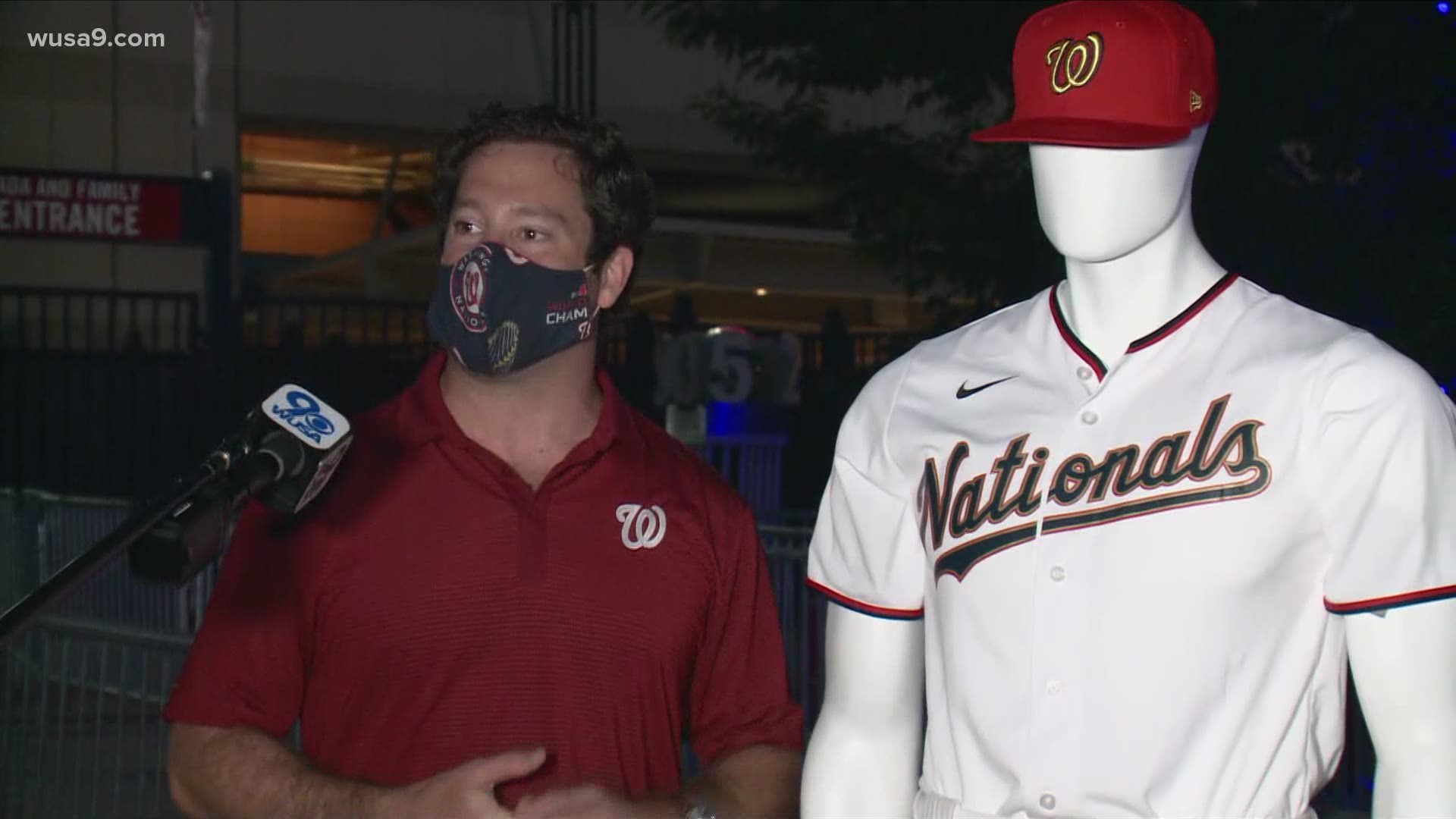 As for who is throwing out the first pitch of the season, that honor goes to self-proclaimed Nationals superfan Dr. Fauci. He will toss the pitch to Sean Doolittle around 7:08 p.m., followed by a prerecorded performance of the national anthem by singer DC Washington.

And it wouldn't be a Nationals home game without our favorite racing Presidents. While the historic bigheads won't actually be running the bases, they have previously recorded a race that will air during the game's fourth inning.

The team is also showing their support for recent activism efforts, with a Black Lives Matter stencil set to appear on the pitcher's mound during Opening Weekend games. They will also celebrate and honor frontline workers throughout the season.

With fans being shut out from the stadium, many are taking to nearby hotel rooftops and apartments to view the game. The Hampton Inn & Suites on the corner of First and N already said they are booked up for their Top of the Yard rooftop bar that offers a stunning overlook into the ballpark.

Credit: AP
The stands are empty during an exhibition baseball game between the Washington Nationals and the Philadelphia Phillies at Nationals Park, Saturday, July 18, 2020, in Washington. (AP Photo/Alex Brandon)

The game, which will be aired nationally on ESPN, starts July 23 at 7:08 p.m. The season is expected to have virtual watch parties featured on the main scoreboard so players can experience the fans’ energy and enthusiasm.

It might not be the season we asked for, but that doesn't mean it's a season we can't celebrate!

RELATED: Here's how to get beer and hotdogs from Nats Park delivered to your door

Best seats not in the house. pic.twitter.com/lyzolsqtp1

RELATED: How and where you can watch your DC sports teams as professional leagues start back up soon

RELATED: Baseball's back, sort of. A look at the first day of the Nationals return as a post-pandemic season begins