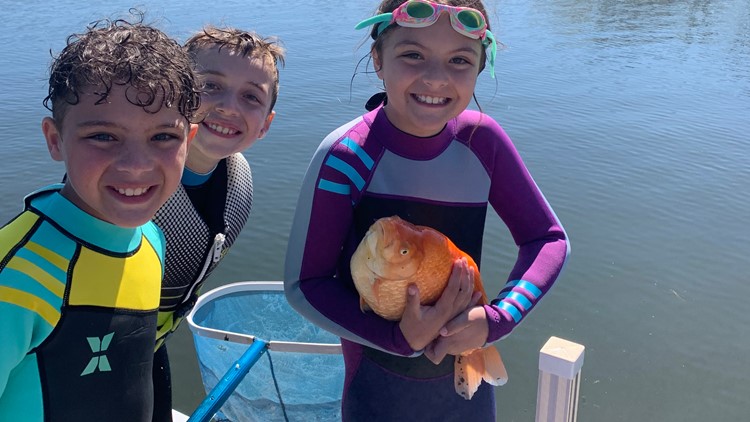 Photo by: Melissa Gulden-Maleson
Earl, Gabe and Izzy with their unusual catch.

Three siblings were goofing around with a net in Cedar Island Lake when much to their surprise, they caught a huge goldfish.
Author: Dana Thiede
Published: 1:45 PM CDT May 1, 2020
Updated: 9:00 AM CDT May 5, 2020

MAPLE GROVE, Minn. — These are strange times, the days of COVID-19: Parents are working from home, students aren't at school, restaurants, bars and many stores are locked tight, and routines are completely topsy-turvy.

And then... there's the case of an odd catch from the waters of Cedar Island Lake in Maple Grove. Like a lot of kids these days, the children of Melissa Gulden-Maleson are looking for things to do. Despite the fact it was only April 30, Earl, Gabe and Izzy figured a sunny day was as good an excuse to jump in the lake as any. They slipped into their wet suits for added warmth and wandered down to the dock in their back yard.

She was working outside at a table when she heard the kids screaming. Thinking it was a water emergency she jumped to her feet and sprinted to the lake, only to see her youngsters standing on the dock, one of them holding a giant goldfish in a net.

This was not like any sunfish Earl, Gabe or Izzy had ever pulled out of the lake before.
Melissa Gulden-Maleson

As 12-year-old Earl tells it, the kids were wading and fishing with a net, as they like to do when not chasing sunfish with their conventional fishing poles. Gabe noticed an orange flash, Earl swooped with the net and came up with the goldfish.

This was not your little swim-around-the-tank-on-your-dresser goldfish, mind you... it looked to be at least a foot and a half long and a couple of pounds worth.

"I had to hold it with two hands, kinda hug it, it was so heavy," Earl recalls. The 12-year-old ran for shore so fast he almost lost a flipper in the muddy bottom of the lake.

The kids were excited, but their mom was not in the same mindset. "I was scared, I'm not gonna lie," Melissa says. "They wanted to keep it but I said no... we didn't need a tank that big."

Twins Gabe and Izzy and older brother Earl all took pictures with the bright orange exotic before carefully returning it to the waters of Cedar Island Lake.

Gabe, Izzy and Earl all posed for photos with the giant goldfish before they returned him to the lake.
Melissa Gulden-Maleson

The DNR previously told KARE 11 that goldfish are not native to Minnesota waters, and usually end up in lakes after being released by someone who no longer wanted them in their tank or ornamental pond.

Melissa Gulden-Maleson alerted us to this fish tale via text message. If YOU have a great story, photos or videos to share, text KARE 11 at 763-797-7215!

RELATED: Minnesota man reels in big muskie through the ice