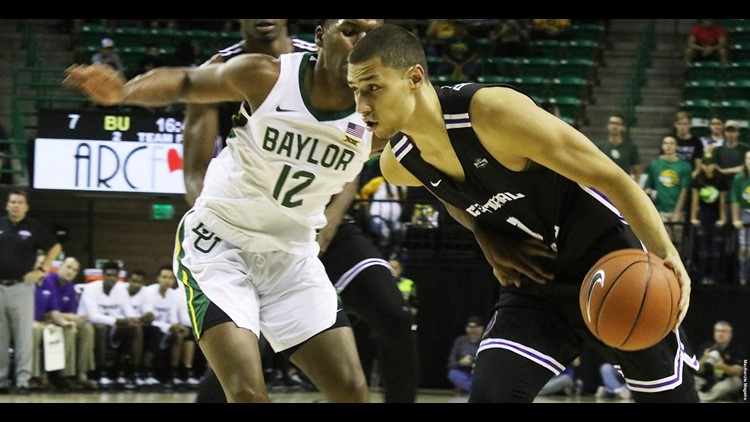 WACO, Texas — University of Central Arkansas head coach Russ Pennell said his Bears had to play really well in their season opener on Tuesday to have a chance against a Top 25 team.

They failed to do that early as the 16th-ranked Baylor Bears scored the game's first 19 points en route to a 105-61 victory before a crowd of 8,805 at the Ferrell Center.

The red-hot Baylor Bears made 18 of 33 from three-point range (54.5 percent) and shot 56.3 percent overall in winning their 15th season opener in the past 17 years. The Bears helped by misfiring from the field, the three-point line and the free-throw line.

"Your margin for error is so slim in these type of games,' said Pennell, who is beginning his sixth season as head coach of his alma mater. "When you miss free throws early and you get behind, it really plays with your mind. You almost wish in these type of games that they'd just turn the scoreboard off. Not because it's so bad but because then you would play more about what you do.

"I thought when we did what we've been coached to do, I thought we were good. I thought we had some possessions where it was like, that's as good as you can do it. There just wasn't enough of them. We violated enough principles, especially defensively, that they burned us. They are a really good team. I told (Baylor coach) Scott (Drew), if your backcourt can play like it did today, that was fantastic. Both of those guys are transfers, one from Auburn and one from North Carolina-Ashville. They set out and now they're here to help them. Plus the big fellow, (Tristan) Clark, is a load. But I thought Hayden did a really nice job on him. I thought he played him really tough.'

The UCA Bears started ice cold going 0 for 8 from the field to open the game and fell behind 19-0 in the opening six minutes. Sophomore Eddy Kayouloud got UCA on the board with a basket at the 13:45 mark and Baylor outscored UCA just 34-32 the rest of the half.

Baylor connected on 9 of 15 from three-point range in the opening half while UCA was just 2 of 10 from beyond the arc. Free-throw woes made it even more difficult for the Bears, who made just three of their first 10 at the line before finishing the half 10 of 18 (55.6 percent). Baylor also dominated the boards with a 24-14 rebounding advantage.

Junior transfer Rylan Bergersen rallied the Bears down the stretch, scoring UCA's final seven points of the first half with drives to the basket. Kayouloud had a team-high nine points and Bergersen and center Hayden Koval had eight each in the opening half. Baylor had three players in double figures at the break, led by Jared Butler with 16 (4 of 7 from three-point range).

"I thought some guys played well, but we have to get more of them playing well,' said Pennell. "I thought they did play hard. I told them I was proud of that. I didn't think we backed down. But you spot a Power 5 team 20 or 22 points, you spotted them something that is almost insurmountable, it really is. You're probably not going to come back from something like that.

"So I think the whole thing in these type games is finding your way to play a standard of basketball that you know in the Southland Conference can win. And every coach in our league is looking for that in these type of games. There's a reason Baylor is 16th in the country. There is a reason they have the facilities they have and they are on TV all the time. They're a Power 5 team. But it doesn't mean that we can't come in and compete with them, but we also need to keep it in perspective as we go through this.'

The UCA Bear did compete for most of the second half, getting to within 21 points early in the half. UCA. Bergersen, a transfer from BYU, led the Bears with 17 points while adding 6 rebounds and 2 assists. Sophomore forward Eddy Kayouloud followed with 13 points, and junior Hayden Koval had 12 points, 3 rebounds and 3 blocked shots. UCA shot 36.1 percent overall for the game and went 13 of 24 (54.2 percent) from the free-throw line and 4 of 23 (17.4 percent) from beyond the arc.

"What we have to take from this game is the good,' said Pennell. "Try to improve upon the bad but really kind of flush it. And I told them, in our case, we have to travel home, practice tomorrow and then play Thursday. We can't have a hangover or anything other than you're trying to win a ballgame Thursday.

"The big thing for me is this... I told them I didn't care if we're playing Hendrix or we're playing the Lakers on Thursday, they better bring it. After you come off a loss like this, you have to be stinging. You need to have a bad taste in your mouth. And you have to come and play. It's very important that we don't do some immature things like think that Hendrix is just going to be a given.'

Baylor sophomore guard Jard Butler went 8 of 12 from three-point range for a game-high 30 points, while MaCio Teague had a double-double with 18 points and 10 rebounds for the home team, which shot 56.3 percent overall and outrebounded UCA 51-30.

UCA hosts crosstown rival Hendrix at 7 p.m. Thursday at the Farris Center before a two-game road trip to Georgetown (Saturday) and Duke (Tuesday).