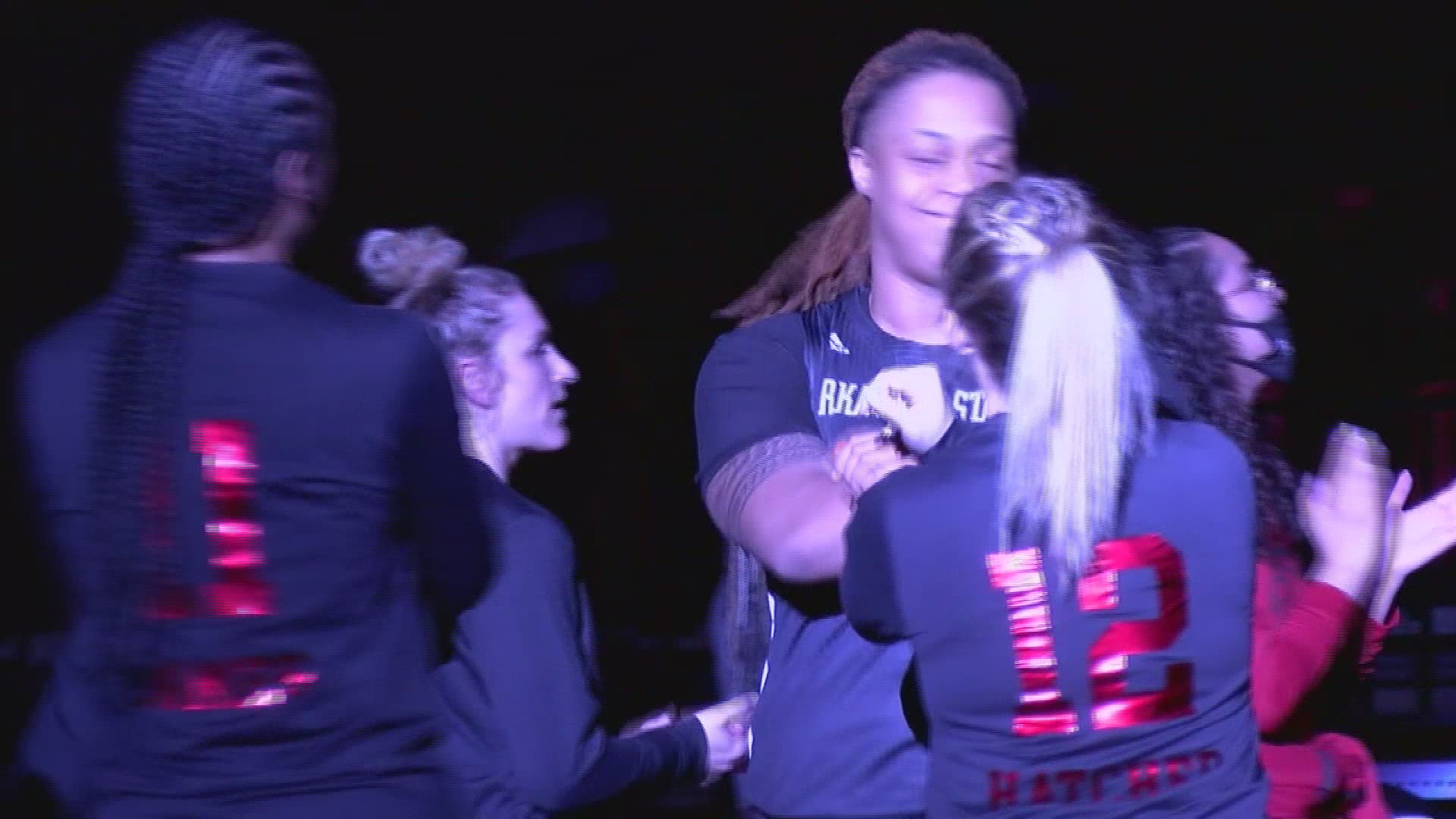 JONESBORO, Arkansas —  After waiting a week to open Sun Belt Conference play, Arkansas State's league opener came right down to the wire, as the Red Wolves held off Texas State for a 54-53 victory Friday night at First National Bank Arena.

"Our group was really resilient," head coach Matt Daniel said. "We had to get two stops on the fly, so I'm really proud of our group. We fought foul trouble early. We knew what it was going to look like early, with them taking charges. They still did it and we were unable to get away from it. I'm happy to be 1-0 in the league and playing a game. I'm just really proud of the resiliency of our group."

Morgan Wallace led the Red Wolves with 12 points and nine rebounds while Jireh Washington added 11 points – nine in the first half. Trinitee Jackson was key in A-State's battle of the boards, bringing down a game-high 10. The Red Wolves edged the Bobcats in rebounding 38-37. Peyton Martin also notched three blocks with five boards.

Texas State scored the game's opening points on a layup by Hood, but A-State responded on a trey by Jada Stinson. The Bobcats got another inside bucket before the teams went on a three-minute-long scoring drought. Mattie Hatcher ended the drought with a three to put A-State ahead 6-4 with 5:04 left in the first. A 7-0 run put the Bobcats ahead 11-6, but the Red Wolves closed the opening quarter with an 8-2 run capped off by a buzzer-beating layup by Martin to lead 14-13.

The Red Wolves opened the second quarter by outscoring Texas State 10-4 to extend their lead out to seven at 24-17, but the Bobcats responded with a 6-0 run to cut it to 24-23 with a minute left in the half. With two seconds left, Washington drove to the rim and converted, drawing a foul and sinking the and-one to give A-State a 27-23 lead at halftime.

The third quarter was back and forth throughout, with neither team establishing full momentum. A-State managed to hold off the Bobcats and hold a tight 43-40 lead entering the fourth.

In the fourth, A-State opened up with a 7-2 run to stretch its lead out to 10 with 5:29 remaining. The Bobcats then went on an 11-0 run to reclaim a 53-52 lead with 30 seconds to go on a free throw by Thompson after missing the first. The Red Wolves reclaimed possession and called timeout to advance the ball. With 15 seconds left, Jackson hit a layup to give A-State a 54-53 lead. A steal by Jackson with nine seconds followed by a turnover gave possession back to Texas State, but a missed jumper followed by a rebound by Jackson closed out the victory.

The Red Wolves will conclude their Sun Belt-opening series with the Bobcats on Saturday at 4 p.m. The broadcast can be watched live on ESPN+ while the radio broadcast can be heard on 95.3/96.9 The Ticket.