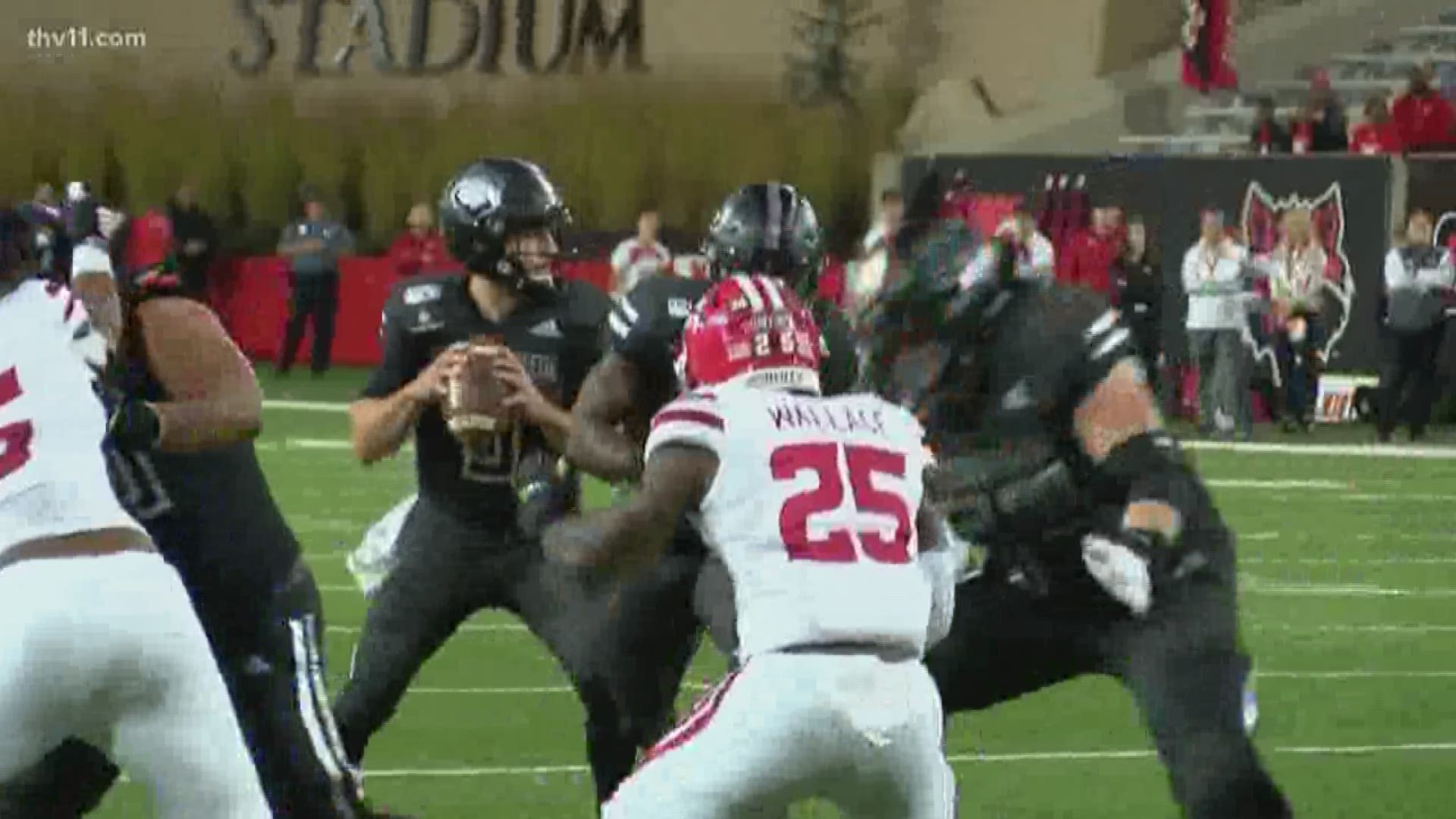 JONESBORO, Ark. — Arkansas State senior wide receiver Omar Bayless was named the Sun Belt Conference Player of the Year and quarterback Layne Hatcher the league’s Freshman of the Year on Wednesday as 16 Red Wolves were tabbed to the All-Sun Belt Team.

Including six first team, two second team, four third team and four honorable mention choices, A-State’s 16 different players finding a spot on the all-conference squad were the second most in the league behind Appalachian State’s 18.  The Red Wolves tied the Mountaineers for the most first-team choices in the league.

Arkansas State’s 16 different All-Sun Belt players also tied the program’s third most ever behind its 18 in 2017 and 17 a year ago.  The Red Wolves have now had at least 10 selections 10 consecutive years and 13 times since the Sun Belt’s inaugural 2001 season.  Additionally, they have 95 all-conference picks since 2014 under head coach Blake Anderson for the most in the league during that span.

With the addition of Bayless, an Arkansas State player has now won the league’s highest individual football honor four consecutive years and six times overall – both Sun Belt records.  Outside of A-State, no other all-time Sun Belt program has seen more than three players take home the honor.

Bayless becomes the fourth all-time Arkansas State player to garner the recognition, joining former quarterbacks Justice Hansen (2018) and Ryan Aplin (2011-12) and defensive end Ja’Von Rolland-Jones (2016-17).  Along with Florida International’s T.Y. Hilton, he is the only other Sun Belt Conference wide receiver to earn the award.

Bayless completed the regular season as the national leader in receiving yards with a school and Sun Belt Conference-record 1,473 yards to his credit.  He also posted the most receiving touchdowns in school and Sun Belt history with 16, a total that ranks second nationally.  The Laurel, Miss., native also piled up 84 receptions, which currently stands as the third most ever by an A-State player.

Hatcher, a redshirt freshman, is the fourth all-time A-State player to be selected as the Sun Belt Freshman of the Year, joining current running back Marcel Murray (2018) and former wide receiver J.D. McKissic (2012) and running back Reggie Arnold (2006).

Following a season-ending injury to quarterback Logan Bonner, Hatcher stepped into a starting role in the fifth game of the season and quarterbacked the squad to a 5-3 Sun Belt record.  The Little Rock, Ark., native threw for at least 300 yards in five of his eight starts and completed multiple touchdown passes in each of those games.  He ended the regular season by completing 177-of-259 passes for a 68.3 percentage that ranks as the second highest in school history.

The Red Wolves completed the season with a 7-5 overall record to make it bowl eligible for the ninth consecutive season.  The program has also posted at least seven wins each of the last nine years and has piled up 74 wins since 2011 for the 25th most in the nation.