University of Central Arkansas Bears overcame a two-run deficit with three runs in the seventh inning to take down the Arkansas State Red Wolves 5-3. 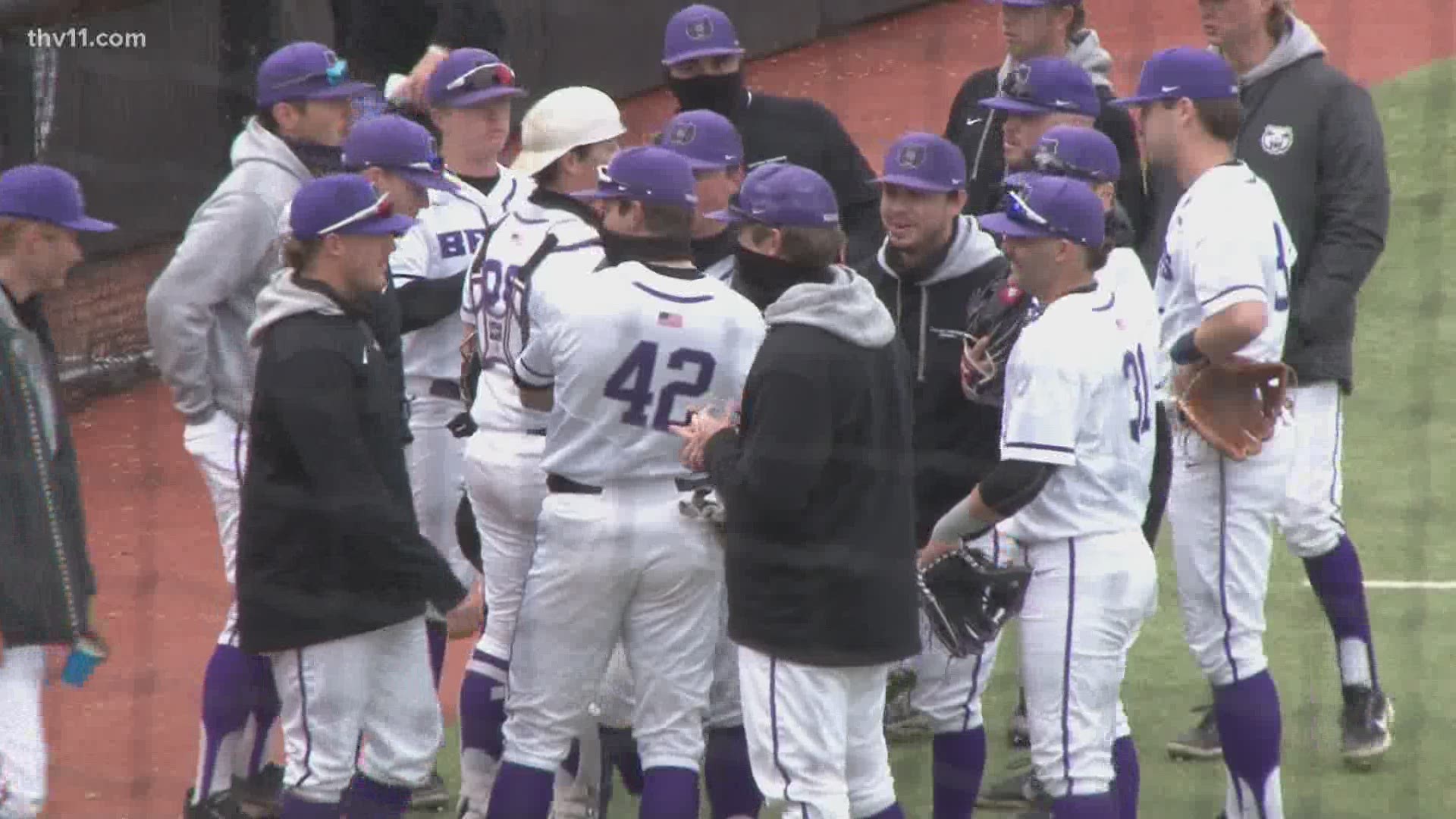 CONWAY, Ark. — The University of Central Arkansas Bears overcame a two-run deficit with three runs in the seventh inning to take down the Arkansas State Red Wolves 5-3 on Tuesday night at Bear Stadium.

UCA (11-20) scored a single run in the sixth to close the gap to 3-2, then picked up three big runs in the seventh off two hits and two ASU errors. The Bears then turned it over to redshirt freshman closer Tyler Cleveland, who shut the door on the Red Wolves, striking out four of the seven batters he faced to earn his sixth save.

Sophomore Andrew Shoultz tossed the sixth and seventh innings for his first victory, striking out two and allowing one hit and an unearned run.

The Bears took an early 1-0 lead in the second inning when junior shortstop R.J. Pearson singled through the right side and brought in center fielder Drew Sturgeon, who had preceded him with UCA's first triple of the season with one out. The Red Wolves (10-20) pushed across two runs in the third inning with three hits and a UCA error.

That lead increased to 3-1 in the sixth but UCA answered in the bottom of the inning when Pearson reached on an error and advanced to second on a throwing error that occurred on the same play. Connor Emmet then singled to left to score Pearson and make it a 3-2 game.

In the seventh, facing ASU reliever Josh Albat, the Bears started with a leadoff base hit by junior designated hitter Taylor Daniell. He moved to second on a passed ball, then to third on a throwing error on the ASU catcher. After left fielder Kolby Johnson walked and stole second, pinch hitter Beau Orlando grounded out to bring in Daniel.

Sturgeon was hit by a pitch and stole second, one of UCA's five stolen bases. Pearson singled up the middle to score both runners and give the Bears the lead for good.

Cleveland relieved Shoultz in the eighth and worked around a base hit by striking out the final two Red Wolves of the inning. In the ninth, he added two more strikeouts and a fly ball to close it out.

Pearson finished 2 for 4 with 3 runs batted in, while Johnson and senior first baseman Coby Potvin had a pair of hits each. Sturgeon scored two of UCA's five runs. Tyler Navarro, in his first start of the season, went two scoreless innings, allowing two hits and striking out two.