The dangers of downloading apps onto your mobile device

TikTok and other foreign-made apps are sparking concerns about privacy and the risks to national security. 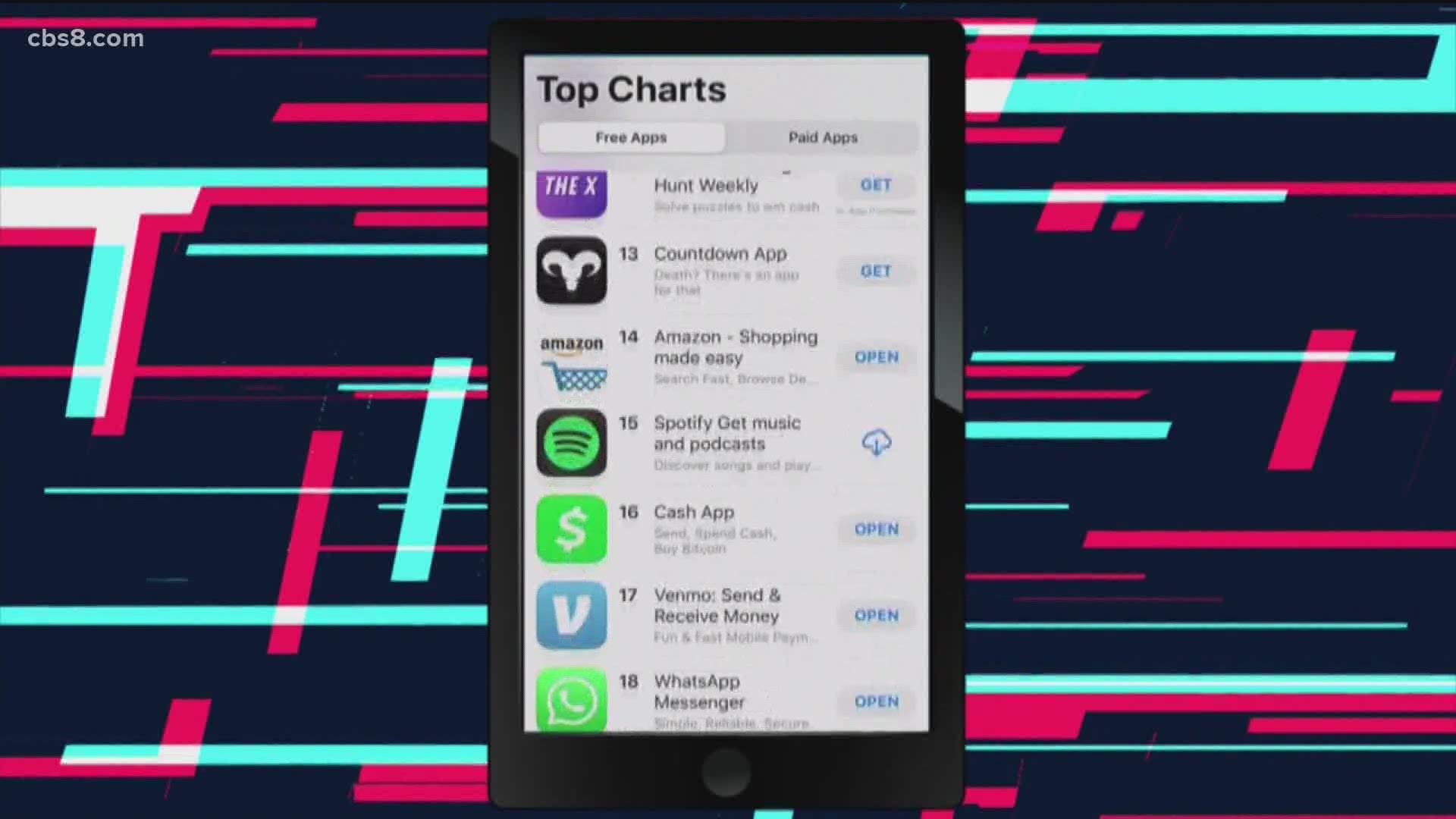 SAN DIEGO — Most people don't think twice about downloading an app, but there's growing concern that foreign-made apps like TikTok pose a risk to people's privacy and even national security.

Known for its viral music and dance videos, TikTok appears to be entertaining, harmless fun, but experts say it could actually be quite harmful.

TikTok is owned by the Beijing-based company, Bytedance.

"There's all the questions on whether or not there's counterintelligence of the Chinese government behind it," said Macy Dennis, Chief Security Officer of Evotek, a cybersecurity firm in San Diego. "You're giving access to all of your stuff. You're giving up your right to privacy."

Dennis explained that using apps like TikTok and the Russian-made FaceApp, which digitally ages your face and went viral in 2019, can leave users and all of the information exposed.

"I'll say [in] China and Russia, there is a constant history that has been proven that those type of backdoors or malware, whether it's hardware or software, are embedded into almost everything," said Dennis.

Users can protect themselves by doing a quick web search to learn more about an app before downloading it. If the app has ties to China or Russia, Dennis said don't download it.

He also warned that family sharing plans for apps, photos, videos and storage could compromise the security and privacy of all family members linked to the plan.

"My daughter could download it and use it. I could work for a government agency and if for some reason that phone is on that plan, those contacts are probably kind of slid in between all the phones within the house. So honestly, they could be gaining access to a lot of things," said Dennis.

When it comes to younger users in their teens and 20s who may feel they have nothing of value to lose, Dennis said the information being collected about them could create problems later in life.

"College students, honestly, they're an easy target for the fact that they'll be the individuals walking into a job in three to four years," Dennis warned.

He said that could lead to corporate espionage.

The Army, Navy and Transportation Security Administration have all banned TikTok on government-issued phones due to spying concerns. Wells Fargo recently instructed its employees to delete the app from company devices. India has banned TikTok, and Secretary of State Mike Pompeo said the U.S. is looking into a ban as well.

"So what you'll see the administration do, is take action to preserve and protect that information and deny the Chinese Communist Party access to the private information that belongs to Americans," said Pompeo.

There's also the potential impact on politics. Just last week, the Trump campaign posted an ad on Facebook that warned viewers, "TikTok is spying on you." It linked people to a petition, which users said linked them to a survey that asked if TikTok should be banned in the U.S.

Some saw it as retaliation for a prank played on Trump campaign organizers back in June. TikTok users falsely registered to attend the President's campaign rally in Oklahoma to inflate expected attendance, leading to a much smaller crowd than anticipated.

TikTok continues to maintain it is safe. A company spokesperson issued this statement to News 8:

"Tens of millions of Americans come to TikTok for entertainment, inspiration, and connection, especially during the pandemic. We are fully committed to protecting our users' privacy and security. TikTok has an American CEO, a Chief Information Security Officer with decades of US military and law enforcement experience, and a growing US team that works diligently to develop a best-in-class security infrastructure. TikTok US user data is stored in Virginia and Singapore, with strict controls on employee access. These are the facts."

In addition, TikTok said it is planning to add thousands of more jobs in the United States over the next three years.

"In 2020, TikTok tripled the number of employees working in the U.S., and we plan to add another 10,000 jobs here over the next three years. These are good-paying jobs that will help us continue to build a fun and safe experience and protect our community's privacy," the company statement read in part.