Tracking Tropical Storm Laura as it moves through Arkansas

After landfall, Laura is making its way through Arkansas and the center of the storm is expected to move over the middle of the state. 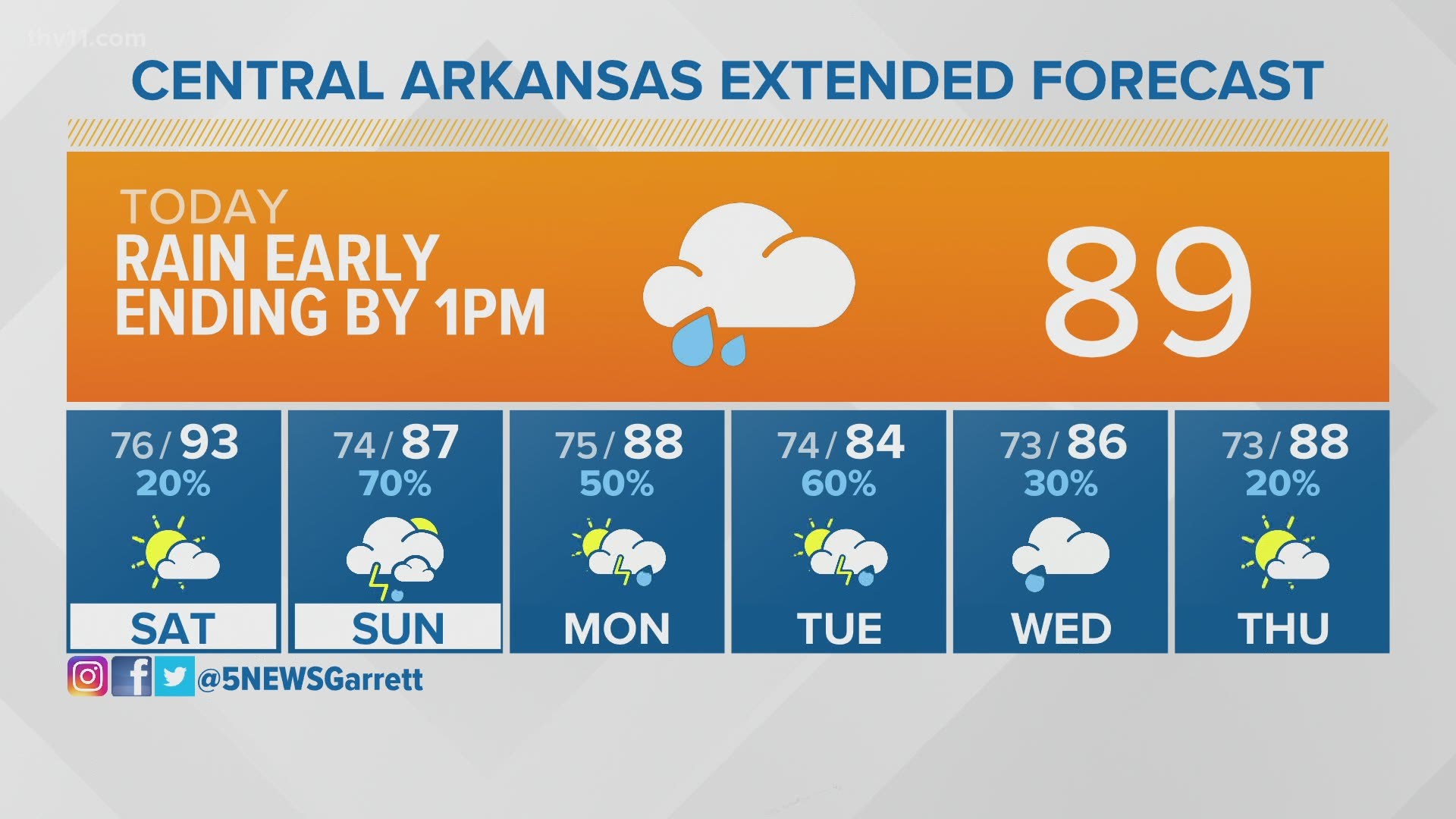 LITTLE ROCK, Ark — Laura's outer bands are now bringing widespread rainfall to Arkansas. This will increase as we move into the afternoon hours.

Heavy rainfall throughout the state has brought several flash flood warnings in counties such as Desha, Monroe, Prairie and Arkansas counties.

Damage is already being reported and power outages are up to 52,000+ in South Arkansas.

Conditions will remain favorable for the development of brief tornadoes through this evening.

Should a tornado warning be issued, the THV11 Weather Team will be live on-air and online.

Currently, there is a tornado warning for several central and eastern counties in Arkansas until 9 p.m.

In addition to the tornado watch, tropical storm warnings have been issued for several counties including Pulaski and points south.

This means winds will likely exceed 39 mph in these areas.

A flash flood watch is in effect for a large portion of Arkansas as we expect to see between 3-7" of rain in many locations.

Given the already saturated ground, flash flooding will be highly likely.

History has taught us even though Arkansas is far from the Gulf of Mexico, tropical systems that move into the region are still troublemakers, and Laura is no exception.

In 2005 and 2008, Hurricane Rita and Ike followed similar paths that are expected with Laura. These systems produced flooding rains, gusty winds of 40 to 60 mph, and several weak tornadoes.

We will likely see similar or greater impacts from Laura.

Tropical moisture will continue to spill into the region through early Thursday morning with scattered showers and storms, but overall, the worst of the weather will be in Louisiana.

By mid-morning, bands of heavy rain will be moving in from the south and southeast affecting southwest and south Arkansas first and then reaching most of the central part of the state through the afternoon and evening.

The winds will increase to between 20 and 40 mph across the region.

Forty to 50 mph sustained winds are expected in the areas with the tropical storm warning. Higher gusts of 55 to 65 mph are possible.

Weak fast-moving tornadoes are possible, especially through the afternoon and evening with any bands that develop east of the center of the system.

Heavy rain will shift into northeast Arkansas through the afternoon. The winds will slowly weaken from the southwest to the northeast through the day.

Rain will become more scattered going into the evening hours. And as dry air wraps around from the west, there could be breaks of sun later in the afternoon.

The rain and wind from Laura will be out of the region.

Laura will bring several impacts to the region including heavy rainfall that could cause flash flooding, gusty damaging winds, and the chance of weak tornadoes.

Here is the forecast:

The highest winds are expected in southwest Arkansas closest to the center before it weakens. Most of the area will see winds gusting between 40 to 50 mph. Downed trees and branches will likely cause widespread power outages that may last for several days.

Rainfall totals are expected to be in the range of 3 to 7 inches for the area. But some locations could see more. Flash flood watches have been issued for most of the state.

The Storm Prediction Center has issued a low risk of severe weather Thursday afternoon and night.

Any showers or storms could rotate, producing a quick weak tornado. There will most likely not be any thunder or lightning associated with any tornado warnings that may be issued.

The best chance will be in the afternoon and evening hours with the aid of daytime heating.

Stay tuned to THV11 and make sure you download or update the THV11 app for the latest.