Authorities have arrested 54 members of a white supremacy gang that is accused of multiple acts of violence, including attempted murder, kidnapping and maiming. 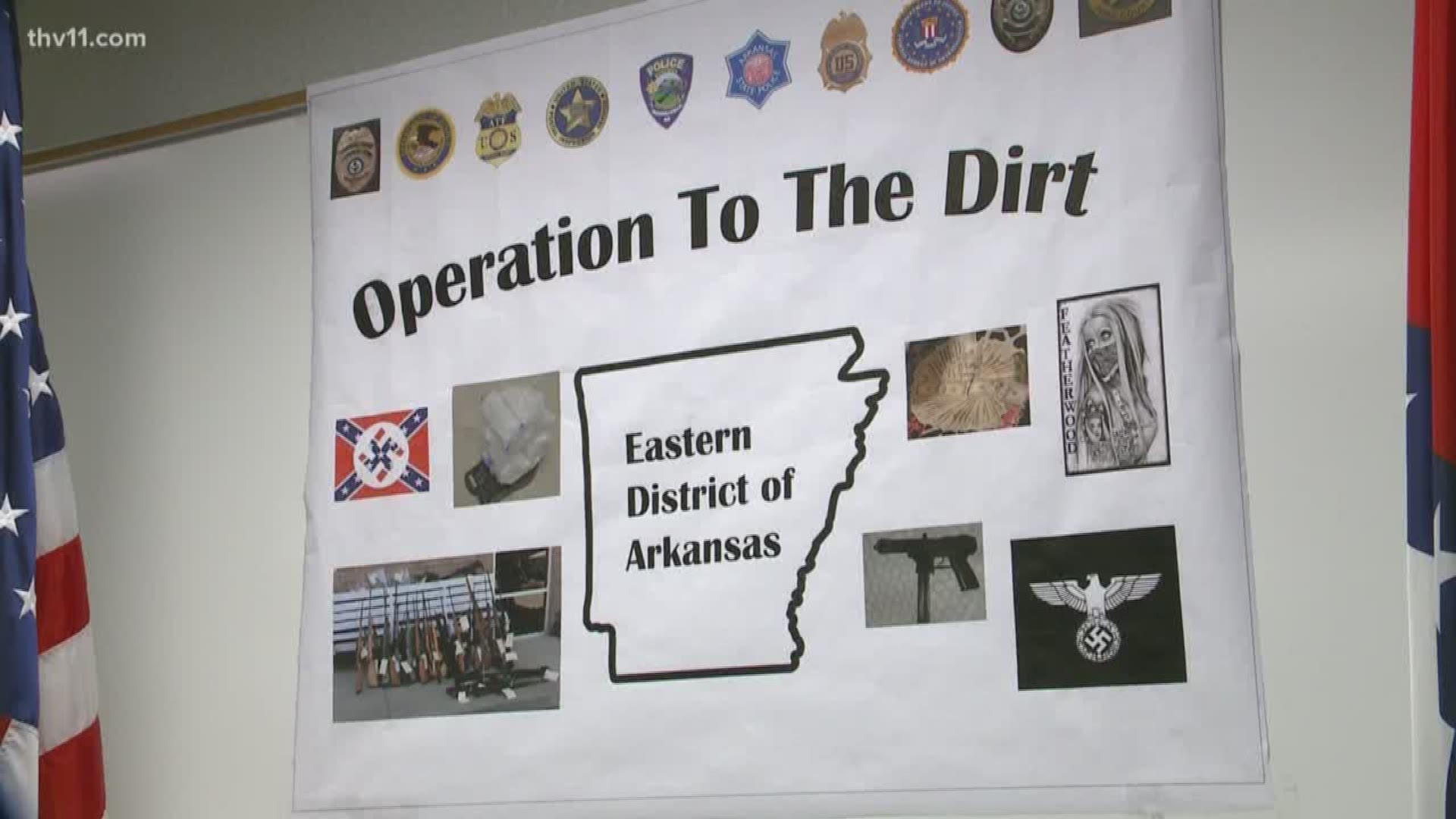 Authorities have arrested 54 members of a white supremacy gang that is accused of multiple acts of violence, including attempted murder, kidnapping and maiming.

The case began in 2016 when federal officials assisted the Pope County Sheriff's Office in a murder investigation.

According to the press release, the murder involved members of The New Aryan Empire (NAE), a white supremacist organization that began as a prison gang.

“This is a monumental task to get to this day, but it has to be done, because these people perpetuate violence and push poison into our communities,” said Assistant Special Agent in Charge Justin King, of the DEA Little Rock District Office.

During this investigation, officials learned that several members of the NAE conducted meetings in Russellville and became involved in meth distribution.

On Oct. 3, 2017, a grand jury handed down an indictment charging 44 people from the Pope County area with several drug and gun violations. Since, defendant Daniel Adame, 32, has pleaded guilty to conspiracy to distribute meth. Eleven additional defendants were named during this investigation, involving attempted murder, kidnapping and maiming charges.

Thirty-five of the defendants are in custody, while 16 were released on federal bond.

The indictment alleges that between May 2014 and May 2016, NAE associates Marcus Millsap, 51, James Oliver, 47, and NAE President Wesley Gullett, 29, solicited several NAE members and associates to murder a confidential informant.

“The NAE is reprehensible in its admiration for Nazi imagery and racist views, but even more alarming are the crimes and violence perpetrated by these defendants,” Deputy Assistant Attorney General David Rybicki said. “In one particularly chilling allegation, a suspected informant’s face was severely burned with a heated knife, causing permanent disfigurement.”

According to the press release, in January 2016, two known members of NAE attempted to murder the confidential informant but were unsuccessful. The indictment also alleges that between May 2017 and June 2017, members of NAE kidnapped, stabbed and maimed two individuals in retaliation for providing information to officials. During the kidnapping, victims were forced to write apology letters to the NAE member and his girlfriend.

The case will be tried under the RICO Act, which means that if you had a connection to any of the gang's crimes, you can be charged with all of them.

Among the charges are "Conspiracy to violate RICO" and "kidnapping in aid of racketeering," both of which can lead to life in prison.

The indictment alleges that from 2014 to present, NAE functioned as a criminal enterprise, also known as a racketeering organization. Racketeering-based crimes can have penalties up to life imprisonment. People charged in R

In addition to violent acts, officials investigated the NAE's meth trafficking organization. During the investigation, officials made 59 controlled purchases of meth, seizing more than 25 pounds, as well as the 69 firearms and more than $70,000 in drug profit.

A majority of the 54 federal defendants are convicted felons, many with violent histories. Among the 69 guns seized include handguns, rifles, shotguns and sever high-capacity assault-style rifles.

“Before I took office, I took some advice from the elected who had been there over 20 years, and I asked him the number one problem that he saw going forward, and it was this group," Russellville Police Dept. Chief Jeff Humphrey said. "So, that’s the best I can answer. That pretty much says it all.”

Those arrested are accused of committing these crimes in support of its organization, the New Aryan Empire, and its wide-ranging drug-trafficking operation.

The case is named "To the Dirt," referencing the NAE slogan, in reference to the gang's rule that members remain in the NAE until they die.