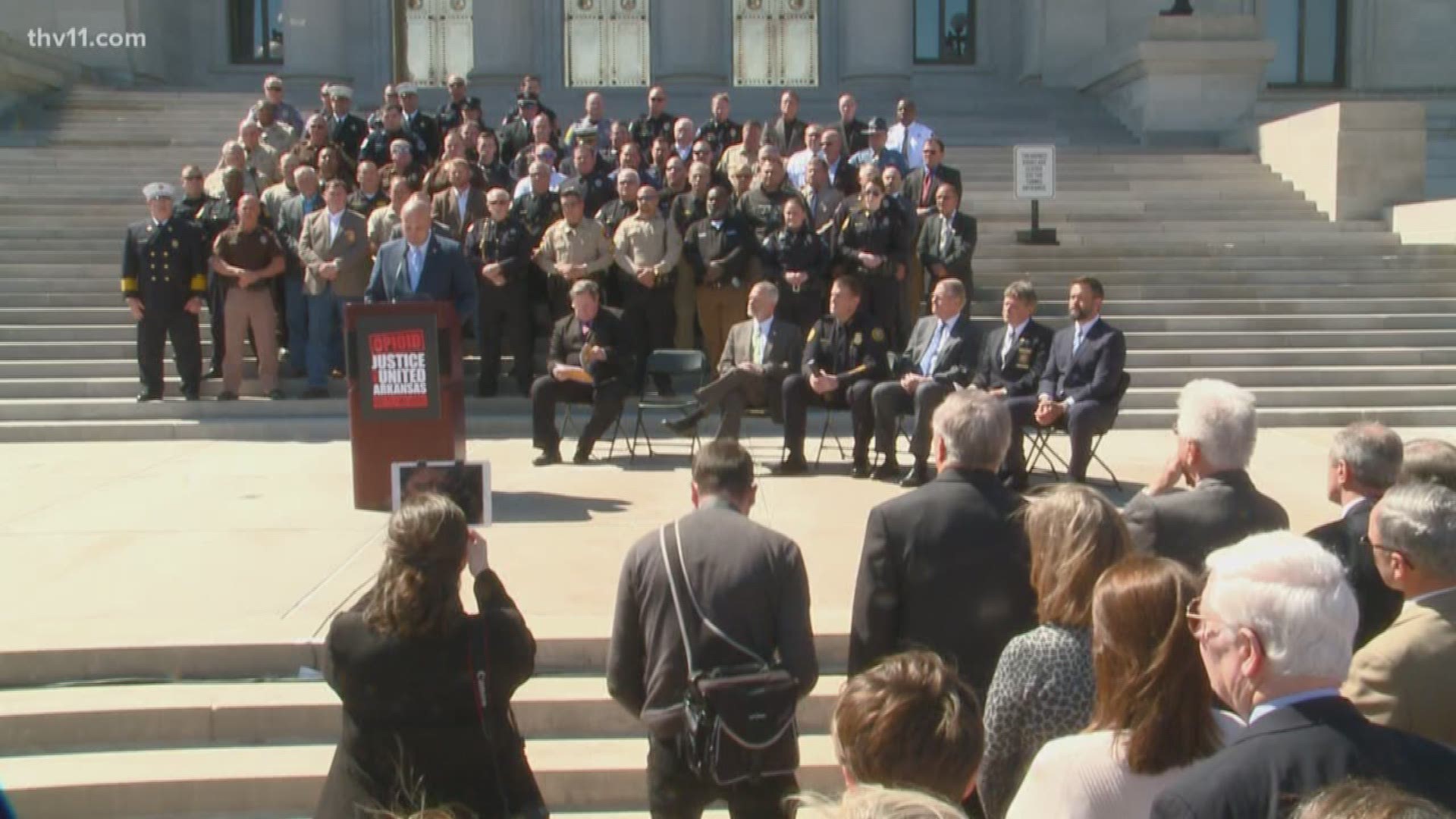 LITTLE ROCK, Ark. (KTHV/AP) - A coalition of cities and counties around Arkansas announced Wednesday it had sued dozens of makers and distributors of opioids, arguing that the companies should bear the cost of drug abuse in the state.

"Today we stand together against the opioid epidemic," Chris Villines, Association of Arkansas Counties executive director, told a crowd outside the State Capitol Wednesday.

The Association of Arkansas Counties and the Arkansas Municipal League announced that 72 counties and 15 cities along with the state filed a lawsuit last week in Crittenden County Circuit Court against the drug firms.

The lawsuit names 65 defendants, including several retailers, pharmacist and physicians. In addition to the cities named as plaintiffs, attorneys said 195 other cities have signed agreements supporting the lawsuit.

The lawsuit doesn't specify how much is being sought, but asks that damages be awarded to cover past costs the local governments have incurred as well as future needs such as treatment clinics and hiring additional patrol officers.

"As it stands, it's likely in the billions," Tapley said of the amount plaintiffs are likely to seek.

Janssen Pharmaceuticals, Inc., one of the companies named in the suit, defended its marketing and promotion of its drugs as "appropriate and responsible."

"The labels for our prescription opioid pain medicines provide information about their risks and benefits, and the allegations made against our company are baseless and unsubstantiated," Jessica Castles Smith, a spokeswoman for the company, said in an email. "In fact, our medications have some of the lowest rates of abuse among this class of medications."

Hundreds of communities around the U.S. have filed similar lawsuits over the opioid crisis. Arkansas Attorney General Leslie Rutledge earlier this year retained five law firms to help investigate drug companies, and a spokeswoman said Rutledge was close to taking action on behalf of the state.

The Centers for Disease Control and Prevention last year said Arkansas had the second highest opioid prescription rate in country, with 114.6 prescriptions written for every 100 residents in the state.

“It is absolutely scary,” Arkansas Drug Director Kirk Lane said of the opioid epidemic. “But I believe it's going to get worse before it gets better and that's the urgency of trying to do everything we can and that everybody needs to be educated on this and everybody needs to make the difference in it.

Additional information in this article was provided by the Associated Press.