As of Sunday, May 17 Arkansas officials announced 181 new COVID-19 cases, bringing the total to 4,759 positive cases in the state. 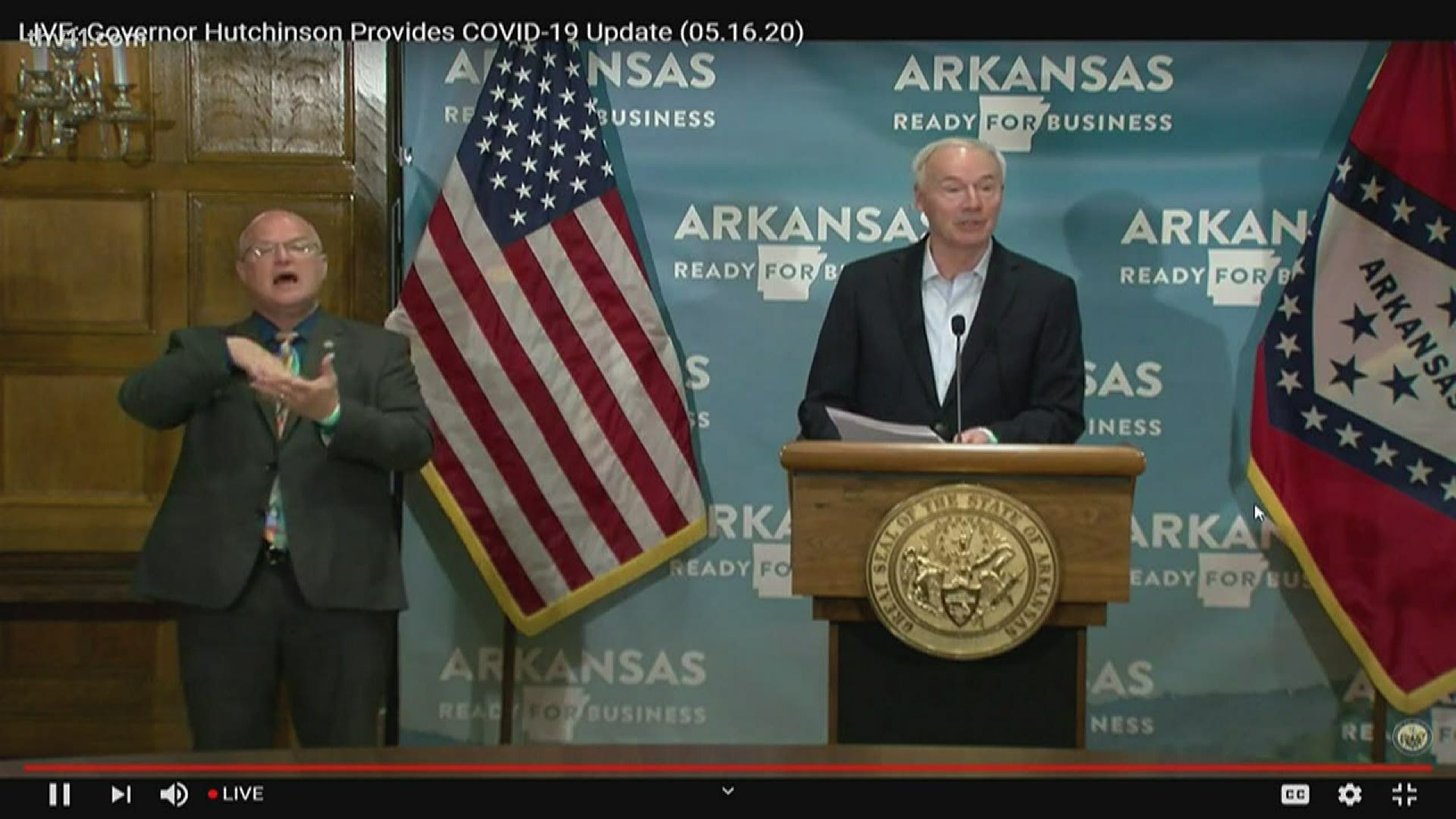 LITTLE ROCK, Arkansas — As of Sunday, May 17 Arkansas officials announced 181 new COVID-19 cases, bringing the total to 4,759 positive cases in the state.

On Wednesday, Gov. Hutchinson announced Arkansas is not ready to enter Phase 2 of reopening the state at this point.

According to the Arkansas Department of Health, there is now a total of 4,759 confirmed positive COVID-19 cases in the state, increasing by 181 since Saturday.

Governor Hutchinson announced that an applicant illegally accessed the unemployment system. He was notified Friday night and the system was shut down immediately in order to prevent a data breach.

An investigation is being conducted. If any data is breached, further action will be taken. The site will be back up as soon as it's deemed safe.

Friday, May 15 is the first day that lodges and state cabins are available and open to the public.

There are currently 975 known active cases in the state.

Gov. Hutchinson said as of Monday, all retail stores in Arkansas are open for business, except bars; A decision will be made about reopening bars on that Monday, May 18.

Hutchinson said it is not an encouraging sign for quick movement into the second phase of reopening the state after officials have seen large increase of positive cases over the past several days.

Gov. Hutchinson says Arkansas is not prepared to move to Phase Two on Monday.

During a press conference, Gov. Hutchinson announced a total of 4,366 coronavirus cases in Arkansas. There was one additional death in the last 24 hours, bringing the total to 98.

There were 1,991 COVID-19 tests in Arkansas yesterday with a 2.6% positivity rate. Walmart is adding testing sites in West Memphis, Texarkana, Jonesboro, and Hot Springs.

RELATED: Arkansans could soon be tested for COVID-19 without showing symptoms, for free

Arkansas Department of Health officials released a map of the amount of active coronavirus cases in each county. You can see the map below.

You can also see the amount of new cases per day, according to Arkansas Department of Health's data below:

During a press conference, Gov. Hutchinson announced a total of 4,236 coronavirus cases in Arkansas. There were two additional deaths in the last 24 hours, bringing the total to 97.

He said there are 72 new COVID-19 cases in Arkansas. Pulaski and St. Francis counties have the most active cases with 100+.

Below you can see the amount of positive COVID-19 cases per day in Arkansas as well as a 14-day moving average:

Gov. Hutchinson said Arkansas has received the COVID-19 drug Remdesivir, which has enough for 50 patients. Some of the 59 patients hospitalized will not qualify to receive the drug.

Gov. Hutchinson will make an announcement on these openings on the following dates:

He said there are 121 new COVID-19 cases in Arkansas, 21 in correctional facilities and 100 in the community. He said 27 cases are in St Francis County; “This is worrisome because of the number in one county.”

On Monday, Gov. Hutchinson said he's distressed by reports of people in the state not socially distancing because of the coronavirus, but he doesn't regret allowing businesses shuttered by the virus to reopen.

He cited no specific examples, but the Republican governor's comments came after social media posts over the weekend showed crowds and lines at some retailers. Hutchinson said Arkansans need to be disciplined in their social distancing to avoid a resurgence of the virus.

RELATED: Things you can do as Arkansas eases coronavirus rules

RELATED: Arkansas venue says concert will go on despite cease and desist order from Gov. Hutchinson